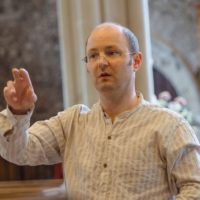 Currently Director of Music at Litchfield Cathedral, Ben Lamb’s love of choral music was kindled as a chorister at Salisbury Cathedral. This has been a key part of his life ever since. He has held organ scholarships at Truro and Salisbury Cathedrals and spent some years in the classroom, latterly as Head of Music at La Retraite Swan School in Salisbury. During this time, he founded Sarum Voices, with whom he has made a number of commercial recordings.

Prior to his move to the Midlands, he was Organist and Master of the Choristers at St Peter’s Bournemouth, and sang as a regular deputy lay vicar with various Cathedral choirs. When Cathy was appointed Assistant Organist here, he took up the post of Director of Music Outreach at St Peter’s Collegiate Church, Wolverhampton, combining this with singing work, first at Birmingham, and then Lichfield Cathedrals. During his two years as Alto Lay Vicar at Lichfield Cathedral, he was also appointed Singing Teacher at Wrekin College, and took on the directorships of the Beaumaris Singers and the Midlands Chorale.

Alongside his work with the Cathedral Choir and Sarum Voices, he directs Lichfield Cathedral Chorus, teaches piano and singing, and maintains a busy freelance career as conductor, arranger, composer and performer.

Margaret Rizza: The Celtic Collection – “Her music has a pleasing melodic facility which makes for attractive listening” (Planet Hugill)