John White: Adventures at the keyboard – “This ear-opening set ought to be a mandatory purchase” (International Record Review) 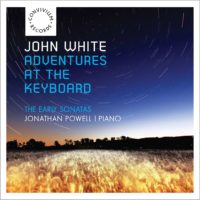 One would imagine that when a country has produced a composer who writes close on 200 piano sonatas, never mind a huge body of works in other genres, his seventy-fifth birthday would be the cause for a rash of concerts across the land, perhaps a Festschrift, at least an article or three in the national press. Such a man, John White, was 75 earlier this summer and yet the public celebrations were confined to a concert in the cramped but increasingly vital venue of the basement of Schotts, on Great Marlborough Street in central London, where a team of pianists, including White himself, played a selection of the 173 sonatas he so far has to his credit.

To be fair to the British musical establishment (not that it often deserves it), White has spent most of his career, as composer and performer, on its fringes, working in experimental music with composers like Cornelius Cardew, exploring minimalism in his Œsystem music¹ which generated patterns through random processes, writing electronic symphonies for early computers, and more. Such a man was never going to allow the easy pigeon-holing which precedes the ready identification that leads to general acceptance.

Of course, Britain has some of the most adventurous and enlightened independent CD labels in the world: one of them, then, will surely have released some recordings of White¹s music to mark the occasion. Not a bit: it is Convivium Records, a company I had never heard of before, and which seems to have only a handful of religious recordings in its catalogue, which has stepped forward with this generous selection of 18 sonatas. White was born (in Berlin, as it happens) on April 5th, 1936, and this double album was released on April 1st, 2011  the 155th birthday of Ferruccio Busoni, appropriately enough, given the importance of Busoni in White¹s own stylistic make-up.

Not all the sonatas are equally convincing, as is entirely to be expected with any prolific composer, let alone one like White, whose goals, influenced by his work with Cardew, have included a deliberate undermining of concert convention  not by avant-garde exaggeration but by turning the gestures of the standard forms against them, with deliberately excessive repetition of phrases and tongue-in-cheek banality. ŒSonatas¹, too, subverts the genre: taking a leaf from Scarlatti, most of them hover around the four- or five-minute-mark, although some are much longer. White also makes little attempt to hide his influences, and the habitual consonance and rhythmic predictability of much of this music give it a wide-eyed innocence at the same time as they impart a slyly ironic quality.

The works here are organized for contrast, which is as it should be, rather than chronologically; there¹s not much stylistic evolution to be found in the ten years (1957-67) covered in this selection in any case. The earliest piece here opens the second CD: the Second Sonata, from 1957, in four connected movements with a duration of 13-and-a-half minutes. The opening ŒSonata allegro¹ (marked Andantino) is angry, abrupt, Prokofievian; the second section, ŒBell Music¹, recalls Enescu¹s late evocations of distant childhood memories, out of which a darker tread emerges; a whirlwind scherzo reprises the mood of the opening movement before an angrily rhetorical rondo-cadenza with echoes of Sorabji (a novel form, as far as I¹m aware). Sonata No. 4 (1959), in four connected movements making 12 minutes of music, offers a series of gawky, ironically simplistic dances, often with a hint of something darker in the background. No. 7 (1960), two linked movements at five minutes, opens with a kind of mantra before gently morphing into a mild ballad. The seven-minute No. 9 (1960) first picks its way forward hesitantly, constantly sounding as if it really wants to launch into a fugue; a warmer Prokofievian texture temporarily pushes the idea out of earshot.

The first of the nine-minute No. 11¹s four movements, less tonally certain than most of its colleagues, is a hesitant Scriabinesque nocturne, the next is a moody tarantella, the third an aimless introspection and the fourth a proud march. No. 12, the second-shortest here at two-and-a-half minutes, has a bold, cocky, Alkanian manner, the opening fanfares giving ground to confident Busonian passagework; the three-minute No. 13, by contrast, is hesitant, feeling its way across the keyboard before finding release in a lyrical passage. White¹s unpredictability kicks in with No. 14, a 24-minute single movement which veers between obsessive repetition à la Schumann to Satiesque stasis, with jazzy riffs blowing over the background textures. The deliberate anti-development sometimes slows the music to a kind of ritual suspension of time.

No. 18 (1963), in three movements and almost a quarter-hour in length, opens over ringing repetitive chords, both hands offering ideas of seemingly deliberately banality which somehow acquire a kind of hypnotic effect; bell-like textures in the central movement point to Busoni¹s carillon-gestures; and the finale has the allegria of early Tippett. The opening of No. 19 (1963), at three-and-a-half minutes, is a beautiful questing passage that brushes past middle-period Beethoven, without losing an essential innocence and with a Busonian rush to close. The five-minute Sonata No. 20 (1963), which opens the first disc, amalgamates Chopin and Busoni, rather movingly; No. 23 (1965), a relatively spacious 11 minutes, is in no hurry to go anywhere, its ringing repeated-chord sequences and rambling passagework good-naturedly teasing the listener; No. 24 (1965), at seven minutes, takes well-nigh obsessional inspiration from the Busoni of the Fantasy after J. S. Bach; and No. 25 (also 1965), at four minutes, sends mock-Tudor arabesques around ringing chords.

No. 28 (1966), only a minute-and-a-half long, is a helter-skelter romp with Baroque echoes; No. 30 (1966) is a brief, four-minute barcarolle, rather like Alkan off-duty; No. 31 rambles agreeably around a series of repeated gestures and harmonies  as, indeed, do most of these pieces to some degree or other  which leads to a lovely chordal passage à la Alkan. Finally, for the moment, No. 34 (1967), at just over four minutes, sets up a pulsating bass while the treble hints at Prokofiev and more before the business is taken over by a repetitive folk-like figure.

These recordings reinforce Jonathan Powell¹s reputation as a crusader for the piano music that other pianists fail to notice. It would be easy to over-egg White¹s gentle irony; Powell gets the mock-innocent tone just right, maintaining its emotional ambiguity  just how seriously should we take this music? Its recurring ability to remain unarguably lovely even as its repetitions test the listener¹s attentiveness means that it never forfeits your sympathy. Another pianist-composer, Dave Smith, supplies helpful booklet notes. The recorded piano shows just a tiny hint of strain in the climaxes but is otherwise entirely acceptable.

That birthday concert opened with Powell¹s magisterial performance of White Symphony in Five Movements in Memory of Ch. V. Morhange (1961), itself a magisterial composition, 25 minutes long and yet still only part of White¹s Sonatina No. 8, which is some 90 minutes long (it was written during a period of gigantism, the composer explained). Ch. V. Morhange was, of course, Alkan, and White¹s work manages to tread the fine line between tribute and parody without losing an identity of its own. Hearing it in concert underlined just how much work the microphones have to do to catch up with White, and what rewards lie ahead if they ever do. In the meantime, this ear-opening set ought to be a mandatory purchase for anyone interested in the hidden history of the piano in the twentieth century.

International Record Review was an independent British monthly classical music magazine. First published in March 2000, and defunct by April 2015 according to its website, the magazine reviewed classical music CDs, DVDs and books.