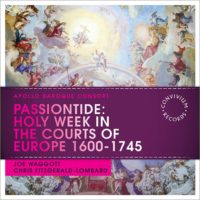 Passiontide: Holy Week in the Courts of Europe (CR015)

This recording is one of the most beguiling I have enjoyed in recent years. Rare, lyrical, involving music sung musically and intelligently by Chris Fitzgerald-Lombard and supported sensitively and unobtrusively by Joe Waggott makes this CD a must for any music lover. The supporting cast of singers and instrumentalists add to the colour and variety of the sound world and the generous acoustic of the wonderful Pearson church of St Alban, Highgate, Birmingham provides a suitable halo to the recorded sound which is excellent – clear, warm and present.

Waggott and Fitzgerald-Lombard state that one of the aims of the Apollo Baroque Consort (the ensemble’s name) is ‘to nurture and expose some of the vast young talent in the early music world and to give young performers opportunities to perform this music to a professional standard’. This is a laudable aim and both these young musicians from Birmingham Conservatoire demonstrate their professionalism at every turn. But, as much as anything else, the overriding and lasting impression is the love of the music and the sheer physicality of the music making which connects at every turn.

Now on my third straight through listen I expect this disc to join me on my desert island to which I would retire with pleasure in this company.

Paul Spicer is an influential conducting teacher, an English Music scholar, an illuminating speaker, and a sensitive and experienced recording producer amongst the wide-ranging talents he brings to his successful career.

He has had one of the most varied musical careers of recent times and this is has led to a unique and wide-ranging diversification of skills. This website will give you the chance to explore the passions, motivations and achievements of one of the UK’s most distinguished and respected choral conductors, composers and teachers.

You can listen to extracts from many of his compositions, taken from a wide variety of recordings made in recent years. There is a short sample of music here on the home page. Please click the link below the menu to listen and get a taste of Paul Spicer’s music. Each time you visit this home page, you will hear a new clip of one of one of his compositions. If you wish to  know them more, there are many samples on the compositions pages and you can purchase CDs directly from the recordings pages. There are links below to many of the CDs which allow you to purchase many of them from iTunes or Amazon. However, some are only for sale directly from the choirs’ own websites.

Paul Spicer fell under the powerful spell of choral music when he was a chorister in Oxford. At this early age his imagination was fired by the music of Herbert Howells, leading to a lifetime’s work on the composer and an eventual highly successful biography. This love of choral music led him to a successful conducting career and an eventual desire to pass on his conducting skills to others. He set up postgraduate courses in choral conducting at the RCM and Birmingham Conservatoire.

Every venture Paul undertakes is driven by his passion, commitment and total involvement – a reflection of his personality. It is these traits which make his choral workshops stand out as uniquely inspiring. These workshops galvanise singers from all over the world and regularly take him back to places which want to repeat the experience. Paul’s celebrated communication skills, along with his passion mean that he is equally skilled in talking, lecturing or teaching.

English Music from the first half of the 20th century is now widely-accepted and highly-regarded, thanks – in no small way –  to the efforts of Paul Spicer and a number of his contemporaries. Throughout the ‘bleak years’ when it was generally derided as unfashionable, they maintained, developed and shared their love of this music. Now, thanks to this vision and devotion, it is becoming recognised for its quality, originality and variety. It is this tradition which Paul is committed to continuing and developing.