Art Pianos: New York to Buenos Aries – “Some CDs are hard to review but easy to summarize, and this is one of them. It’s a lot of fun!” (Music web International) 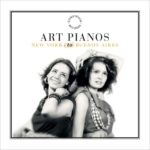 Feast your eyes on that list of tracks! The duo Art Pianos has chosen a program composed entirely of delicious treats: Percy Grainger’s Fantasy on Porgy and Bess, one of Heitor Villa-Lobos’ Bachianas Brasileiras, Arturo Marquez’ Danzón No. 2 (made a pops hit by Gustavo Dudamel), and a whole sheaf of fun Brazilian music.

I can’t imagine anyone not loving this repertoire, and that may be the reason why two Polish women can play it so successfully. The appeal is so universal that anybody can enjoy hearing the music — and playing it. The Art Pianos duo squeeze every drop of passion and wistfulness from two Piazzolla tangos, dance across the keys to Arthur Benjamin’s touristic Jamaican Rumba, and do a pretty convincing job with the Marquez Danzón. If you’ve heard the Dudamel recording of that piece with his Simon Bolivar Youth Orchestra, you know there’s no replacing the sound of a full orchestra tearing into this showpiece, so I had low expectations. They were easily surpassed: the two-piano version succeeds on its own merits. No, it’s not the same, but yes, it’s still fun.

A major theme here is the Brazilian musical legend Radamés Gnattali. His suite here, Brasiliana No. 8, is a charmer which blends folk melodies, an easygoing spirit (no drama here), and clear knowledge of trends in the European classical music of the time. Two homages by Gnattali are also programmed, by Paulinho da Viola and the legendary Antonio Carlos Jobim; the booklet even has a poem about Gnattali written by Jobim.

Heitor Villa-Lobos steals the whole show, however, with his extraordinary Bachianas Brasileiras No. 1, beginning as it does with a totally arresting, wow-which-piece-is-this dramatic intro and ending with a tightly coiled fugue that lives up to both words in the title. The two-pianos transcription is maybe the most convincing one on the disc, carried out by Russian pianist Aron Bubelnikov. It relies less on the bright upper-octave writing that characterizes a lot of piano four-hands repertoire.

Though there may be better performances of some of these pieces (like the Gershwin/Grainger), this recital’s main value is in how enjoyable it is as a tour of the Americas. The sound is plenty good, even though no recording date or venue is mentioned in the booklet. And the notes, as mentioned, include that poem by Jobim.

Some CDs are hard to review but easy to summarize, and this is one of them. It’s a lot of fun. If you want to have fun listening to music from the Caribbean and South America, grab this and enjoy.