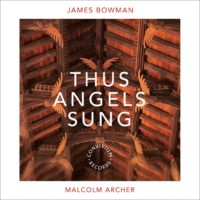 From Bowman’s explanatory introduction it appears as though this is Bowman’s “bowing out” disc as a recording artist – he at once makes it clear that there is no programmatic link between the works featured, but that they are simply pieces that he likes and that “at the end of a recording career” he hasn’t as yet managed to include on any other recordings of his, hence trying to rectify this here.

The disc is recorded in the fairly resonant acoustic of Portsmouth Cathedral, and most of the works featured are arrangements or transpositions for counter-tenor – hence the inclusion of music such as Elgar’s Where Corals lie and Quilter’s How should I your true love know?. Only the three songs by Malcolm Archer and Christopher Moore’s Oculi Omnium were actually written for counter-tenor. It is, perhaps, not very surprising that the most successful arrangements / transcriptions are those of the two works by Britten, a composer of course very familiar with the countertenor voice. The Quilter How Should I your True Love Know? and Stanford’s The Rain its Raineth Every Day do not, to my ear, work at all well for counter-tenor voice, although I was surprised to find that Vaughan Williams’s The Call is actually really quite effective. Elgar’s Where Corals lie also doesn’t works too badly for this voice, although Bowman sings it far too pretty and smoothly, thus losing the intensity of the song. My only other minor criticism of Bowman’s singing is that the intonation isn’t fabulous – he is just slightly flat, noticeably so in Pettman’s I saw a Maiden.

There are also some works for solo piano, such as the Scott Lullaby – possibly included as fillers; I could have done with a little more sensitivity and flow in the performances of works such as this from Malcolm Archer.

The disc is a little on the fluffy and glossy, rather than serious, side – the works generally tend towards the saccharine; while in the booklet there are no proper work notes (except for the three Archer songs), and there are lots of glossy photographs of the performers and trendy layouts.

Nevertheless, this disc would make a nice gift for someone who enjoys listening to classical music, perhaps, without being a serious buff – especially being presented, as it is, in a rather nice and substantial *red box.

*Note that red box is not currently available