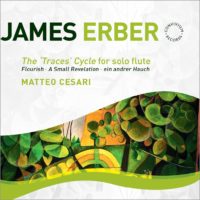 A review by Arnold Whittall

Seventy-three minutes of solo flute and piccolo music, fifty of them Traces, a three-part composition that James Erber worked on between 1991 and 2006, with final revisions in 2011-12. The austerity of the principle might seem extreme, but the title gives a pointer to how multiplicity and a degree of sensuous subtlety emerge from a single line that spends a large proportion of its time in the region above the single treble stave on which the music is notated. Traces can be prospective, retrospective, evocative, provocative: and although users of the score will observe that a sequence of sections with a certain number of subdivisions defines the overall form, the attentive ear should begin to process the flow in terms of essential differentiations that articulate structure and expression.

In unusually extensive and perceptive liner notes, John Fallas introduces the image of the ‘overgrown path’ – the Roman road beneath more recent layers leading from ‘a’ to ‘b’ seen by the teenaged Erber during a walk in the Lake District. The influence of Janáček is not implied by this, but it’s possible to sense something of a comparably earthy spontaneity to the composer of ‘On the Overgrown Path’ in Erber’s musical prose: also, a special skill at avoiding the kind of strenuousness – asserting severe constraints while striving to render them rich and strange – that is not entirely unknown in music of this kind. Erber’s music is that of a serious walker, not a mere rambler.

Erber was forty when he began Traces, and a background that seems to have involved complementing the transcendentalist Germanic intensity on offer in Freiburg (studies with Brian Ferneyhough) with the somewhat sunnier flow that contact with Jonathan Harvey and a feeling for things Italian helped to promote can be sensed in his music’s combination of volatility and poise. On the one hand, the writing is strict and complex in its rhythmic layering: as early as Bar 2 the basic 5/8 metre has a governing 21: 20 (that is, 21 hemidemisemiquavers in the time of 20) within which the initial 7:4 is further divided into 5:4 and then 5:3. Bar 2 launches the music’s on-going drama as a very urgent, contrastive response to the plain five semiquavers of bar 1 and also as an elaboration of them, should the ear begin to perceive F sharp and its microtonal inflections as one entity whose recurrences serve as signposts along the road: these and other pitches can even acquire the degree of stability that increases the energy radiating between them and their less stable, less pointedly repeated fellows.

While Erber might be thought atonal and athematic enough to be categorised as avant-garde, the hints of hierarchy and even – as at the start of Traces B – of the ‘developing variation’ of a basic shape serve not to rule out his candidacy for the modernist mainstream. In places Traces B also has an appropriate abundance of expressionistic drama, especially when insistent multiphonics drive the line into ever more fractious subdivisions. By contrast, Traces C eventually moves not just into lower registers, slower tempos (a recurring quaver = 30) and longer notes, but a poised eloquence that might just be offering traces of Debussy’s Syrinx, Varèse’s Density 21.5 or Berio’s Sequenza 1 – rather than of Ferneyhough’s Unity Capsule or Cassandra’s Dream Song. However, Fallas wisely counsels against attempting to devise a trilogy-spanning ‘narrative coherence’. Although ‘the work‘s underlying material is exposed at last’ in the final stages of Traces C, this is done in such a challenging way for the player that completion and dissolution combine with unusual vividness. With a recording there is less need than in live performance for any sense of strain to appear, but Matteo Cesari well conveys the challenges to breath control and rhythmic articulation that the music imposes: and the recording (made on three separate dates between late January and late May 2013 in St John’s Church East Finchley) brings out the great variety of playing techniques and textural elements without making the single instrument sound like some kind of electronic device.

In the third of his Sonnets to Orpheus, Rainer Maria Rilke equates ‘true singing’ with the wind-like breath of a god – something far beyond the word-serving essence of a human vocal line. By using Rilke’s phrase ein andrer Hauch (a different breath) as the title for his 2012 piece for solo piccolo, Erber affirms his commitment to the special – potentially mystical – ability of music to vocalise textlessly, and thereby to establish a peculiarly potent kind of personal identity. A Small Revelation, a seventieth-birthday present for Brian Ferneyhough, and the much earlier Flourish (1986) complete this satisfyingly intense and distinctive instrumental project.

Tempo magazine exists to document the international new music scene while contributing to, and stimulating, current debates therein. Its emphasis is on musical developments in our own century, as well as on music that came to prominence in the later twentieth century that has not yet received the attention it deserves. The articles and reviews cover the new music scene in all its complexity, featuring discussion of compositional trends, performance practices, listening practices, new music contexts and reception histories. Tempo is sympathetic both to writing about new forms of creative practice (electronic, interdisciplinary, performance-based) and to writing that employs innovative methods of enquiry that differ from the aims of traditional musicology.

Arnold Whittall is Professor Emeritus of Music Theory and Analysis at King’s College London. His recent writings include Introduction to Serialism (CUP, 2008) and contributions to Maxwell Davies Studies (CUP, 2009) and Elliott Carter Studies (CUP, 2012). Recently published articles in journals other than TEMPO include ‘Dendritic designs: Birtwistle’s String Quartet: The Tree of Strings’ (The Musical Times) and ‘Being courteous: the view from the old country’ (Music Theory Spectrum). Arnold Whittall also edits the Cambridge University Press Music Since 1900 series (formerly Music in the 20th Century).