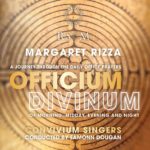 Margaret Rizza’s life has unfolded remarkably. She had a 25-year career as an opera singer (as Margaret Lensky), and also taught singing for more than 20 years at the Guildhall School of Music and Drama. But she started to compose in 1997, and now, in her eighties, has become a phenomenally successful writer of devotional music. Her name has spread around the world, with sheet-music sales in their thousands and chart-topping discs to her credit.

Officium Divinum: The Divine Office, 16 new pieces by Rizza, also comes with a CD recording, performed by the Convivium Singers and directed by Eamonn Dougan, who is associate conductor of The Sixteen. The disc is superb, and the publication itself of a high standard. The works take us on a musical journey through the daily cycle of prayer from dawn to dusk.

There are settings of texts from the Common Worship cycle of daily prayer, contemporary versions of the Magnificat, Nunc Dimittis, and Benedictus, settings of poems by William Blake and George Herbert, a setting of the Gloria in a minor key, and three poems from David Adam’s popular book of modern prayers written in the Celtic tradition.

Ever practical, Rizza wants choirs of all shapes and sizes to perform this music, and she has said that she doesn’t want choirs to be put off because they don’t have the instruments she asks for. Some of these instruments are marked as optional, but some seem to me to be essential, although choirs can adapt to suit themselves. Dynamics are basic, and mainly give an indication of volume rather than expression; and everything is presented in a straightforward and unfussy way.

If you already know Rizza’s music, you will know that it is warm, melodic, soothing, and concordant. It always has something to say musically, but is rarely overtly dramatic (the opening of the Benedictus is an exception), and never ruffles any feathers. If it all sounds “the same” to me, I mean that as a compliment in this context.

The Church Times, founded in 1863, has become the world’s leading Anglican weekly newspaper. It has always been independent of the Church of England hierarchy.

It was a family concern until 1989, when ownership passed to Hymns Ancient & Modern, a Christian charitable trust. The Church Times was started to campaign for Anglo-Catholic principles, which it did with vigour and rudeness.

But in the 1940s and ’50s the paper began the move to broaden its outlook and coverage. It now attempts to provide balanced and fair reporting of events and opinions across the whole range of Anglican affairs. The rudeness we now leave to our readers.