Carson Cooman: The Evening Choir – “Cooman’s sense of the drama of the texts is palpable in the music” (David DeBoor Canfield, Fanfare) 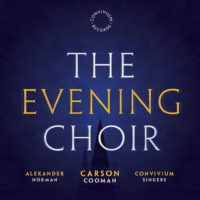 This CD presents a side of Carson Cooman that was previously unknown to me: Beyond his organ music, I’m acquainted with a number of examples of his writing in the chamber and orchestral genres, but heretofore, I’ve not encountered any of his choral music. It comes as no surprise that he has written a goodly number of such works, given his having served as composer-in-residence at the Episcopal Cathedral Church of St. Paul, which I doubt was asking him to write septets for six bassoons and lute.

One of the two major works on the CD is the opening The Evening Choir, a multi-section cantata for soloists, chorus, and organ based on an extended text by 19th-century Transcendentalist author Jones Very. Very, despite the fact that he suffered from delusions (thinking, for instance, that he was the Second Coming of Christ), and was institutionalized for them, succeeded in producing a seemingly very sane text about music in the service of the worship of God. The piece conjures up several more-or-less quiet moods before its end in jubilation. Even in its quieter moments, Cooman’s sense of the drama of the texts is palpable in the music. The soloists produce nice textural variety to contrast with the choral sections, and the organ part, while important, never overshadows the vocal lines.

Be Ye Wise is a setting of two verses of Scripture (Matthew 10:16 and Proverbs 2:10), and is a brief work for a cappella chorus. Tonality is very secure, but Cooman’s exquisite harmonies are most apt to the texts he sets. Born Among Us in the Night is a setting of a text by Richard Leach, and is a carol very much in the tradition of John Rutter (whose Star Carol I was reminded of as I listened to the work). In a similar vein is the following How Lovely is Thy Dwelling Place. In hearing any work with this name, it is difficult not to think of, and compare it to, that glowingly beautiful portion of Brahms’s Ein deutsches Requiem, but Cooman has nothing to be ashamed of in his version, as it is gorgeous, too. The ending is interesting in that it ends, one thinks, on an octave, but the chorus then unexpectedly spreads out to a C-Major triad from it. In Easter Day, a setting of an early poem of Gerald Manley Hopkins, rhythmic activity picks up a good bit, with the outer sections set in a quick 6/8 meter, but filled with hemiolas for rhythmic interest.

A distinctive touch comes in I Have Seen the Lord, which incorporates an alto saxophone into the texture of the organ accompaniment. It is a most effective addition, and one that I’m not aware of any other composer having thought of. The piece is one of the more dramatically jubilant on the CD, and the saxophone adds brilliantly to the intensity. Open sonorities are also much in evidence in this work. Some of Cooman’s more contrapuntal writing is heard in Veni Sancte Spiritus, a setting of the traditional Latin text. The piece draws rather heavily upon the style and techniques of Medieval music, while nevertheless incorporating harmonies from our own era.

The Convivium Singers under the direction of their conductor Alexander Norman, and playing of organist Joe Waggott, render these works beautifully. The chorus is not a large one (about 20 singers), but their blend is beautiful, their diction very intelligible, and their intonation impeccable. Choral lovers fond of the choral tradition of John Rutter, Randall Thompson, René Clausen, John Ireland, Dan Forrest, and similar composers will love this disc. Really, this music is of such quality that it ought to be embraced (and purchased) by music-lovers of all stripes. My wife and her friend, both choral conductors, also heard some of the CD and loved it, so it receives not two thumbs up, but three, including mine.