Plainsong: The Echo of Angels – “Thoughtful and imaginative disc, reflecting Portsmouth Cathedral’s use of plainchant within their liturgy” ★★★★ (Robert Hugill, Planet Hugill) 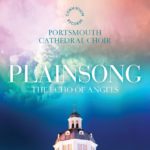 Plainsong: The Echo of Angels (CR025)

Different churches and different denominations use plainchant in different ways. This new disc on Convivium Records from Portmouth Cathedral Choir under their director of music, David Price, gives a lovely snapshot of the choir performing music which is central to their regular worship. The plainchant on the disc is varied, ranging from the Advent Prose and Lent Prose, to Veni Creator Spiritus, the Missa de Angelis and Psalm 42 and sung in both Latin and English. The Cathedral Choir is joined by singers from Cantate, the cathedral’s youth choir and the organ accompaniments are provided by Oliver Hancock and William Wallace.

Portsmouth Cathedral Choir is made up of 22 boy choristers and 12 gentlemen (including six choral scholars). For this disc they use a choir made up of 11 boys, eight sopranos from the youth choir and the 12 gentlemen. The different items are sung by different groupings from this with some being performed by the gentlemen and some by the whole choir. The trebles and sopranos get to show off in the Hodie Christus Natus est from Britten’s A Ceremony of Carols.

The majority of the items are organ accompanied. The Advent Prose is performed in English in an arrangement by Stephen Cleobury, whilst the Latin Missa de Angelis is performed in Adrian Lucas’s arrangement (though beyond adding an organ part, I am not clear what Lucas has done to the mass as it sounds pretty much like the version we sing as part of the Roman Catholic Latin mass). Organist Oliver Hancock provides discreetly improvised accompaniments to the Psalms, the Lent Prose and the Missa Deus Genitor Alme. The lovely Latin hymn Veni Creator Spiritus is performed unaccompanied, which takes me closer to my own experience singing chant as part of the Latin mass. I particularly liked David Price’s Adoro te Devote in which he interweaves the plainchant in an imaginative manner and this is followed by an organ meditation by Arthur Wills on the same plainchant tune.

The choir makes a lovely firm sound, and their performance of the chant is nicely flexible with the feeling of familiarity through daily routine; though I genuinely don’t know which items they might perform regularly and which not. It does not really matter, as the results have a welcome naturalness. When performing alternim with the lower voices, the altos have a slightly narrow tone quality (some of the chant can sit quite high in the counter-tenor voice) and it might have been better to put some trebles/sopranos with them.

The CD booklet has full texts and translations along with information about the various pieces being performed though I did rather find that style predominated over readability and I could nowhere find a listing of exactly which voices were singing on which tracks.

The cathedral acoustic is quite resonant, but the choir is reasonably focussed in the mix albeit with quite a generous halo of reverberation around.