A Multitude of Voices – “Accomplished and well Recorded” (MusicWeb International) 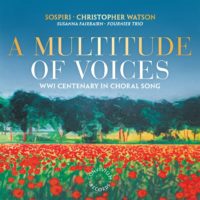 In 2013 I reviewed a fine disc by Christopher Watson and Sospiri, entitled The Lost City – Lamentations Through the Ages. I mentioned then that I had learned from their website that they had plans for a project to commission a number of composers to write pieces commemorating the centenary of the Great War with a view to recording them all. Here are the fruits of that project, though not all the composers whose names were first associated with the project are now represented; perhaps their pieces will materialise in due course.

Even so, a wide range of composers has contributed to the project and each has provided a booklet note about their respective compositions. In a general preface the composer John Duggan, co-founder with Christopher Watson of Sospiri and himself a tenor in the group, explains the motives behind the project. One driver was to expand the choral repertoire for remembrance. Just as importantly, “we wanted…a collection that offered a broader view of the war, reaching beyond the dichotomy of war is noble/war is hell.” So the composers were encouraged to range widely in their hunt for suitable texts. As a result, as well as poets such as Rupert Brooke, Ivor Gurney and Wilfred Owen we find war poets such as Edward Thomas and Isaac Rosenberg, whose poetry is less frequently set to music. Beyond the British war poets we also encounter settings of Apollinaire, Seán Street (b. 1946) and the German poet August Stramm (1874-1915).

There’s some interesting music here, all of it, with two exceptions, for a cappella choir. The exceptions are the first two pieces by John Duggan. In these he has ingeniously devised, from their respective writings, conversations between Wilfred Owen and his mother (The Empty Page) and Edward Thomas and his wife, Helen (As it was). These are set for soprano and tenor soloists with piano trio accompaniment. The singers aren’t credited: I’m guessing that the soprano is Susan Fairbairn; maybe the tenor is the composer himself. They sing well.

I liked very much the three short pieces by the American, Frank Ferko (b. 1950), a composer new to me. He has modelled these three Apollinaire settings on Ravel’s Trois Chansons (1914) and seems to me to have captured the French style very nicely. Cecilia McDowall’s Standing as I do before God is a tribute to Edith Cavell, the nurse executed by the Germans in 1915 for helping wounded Allied prisoners to escape. Some of Cavell’s own words are juxtaposed with specially written lines by Seán Street. Susan Fairbairn has an important role here and, perhaps fittingly, the soprano voice – solo and choral – is to the fore in this touching and sincere elegy.

I’ve admired David Bednall’s music before and I like his Three Songs of Remembrance. The first, a setting of one of Rupert Brooke’s 1914 Sonnets is deliberately simple and the gentle melancholy and light textures are very appealing. The second piece, a setting of Lights Out by Edward Thomas, is fittingly a darker, minor-key composition. The third piece sets a poem May 1915 by Charlotte Mew (1869-1928) and here Bednall uses the first line, “Let us remember Spring will come again”, as an oft-repeated refrain to bind together the structure of his piece.

Colin Mawby (b. 1936) is, I suspect, the only one of these composers old enough to have experienced war directly – he writes that he lived through the bombing of Portsmouth during the Second World War. He takes for his text a poem by Tom Kettle, an Irishman killed at the Battle of the Somme. Mawby’s response to the words is intense; at first poignant and then jagged. To the poem he appends, very appropriately, the Beatitude, ‘Blessed are the peacemakers…’ for which he writes music that is gently beseeching.

At the end of the programme the pieces by Alexander L’Estrange and Francis Pott are imaginatively placed together. The links between them are rain and the poetry of Edward Thomas. L’Estrange uses only lines by Thomas while Pott interweaves lines by Thomas and Isaac Rosenberg. The poem used by L’Estrange is concerned with rain – his setting features an important baritone solo, which is very well done here, and some interesting harmonic turns in the choral writing. Francis Pott points out in his note that Thomas was in some mental turmoil even before the war began and Rosenberg was gravely troubled and affected by what he experienced at the front. Pott’s setting of their words is appropriately intense and restless.

There’s some challenging and stimulating listening here and this Sospiri World War I centenary project must be counted a success because it has expanded the choral repertory related to the Great War very successfully. The performances are all very accomplished indeed and the choir has been very nicely recorded. The booklet is very good in many ways: it includes all the texts – which is important because many are unfamiliar – and useful notes by each of the composers. Sadly, there are some irritating omissions of little but important points of detail: soloists are uncredited and nowhere could I find information about when and where these recordings were made.

A disc of new commissions to mark the WWI centenary. The tone is broadly reflective, though American Frank Ferko finds some lighter shadings. Fine, sympathetic performances.