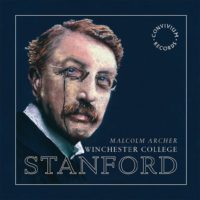 Stanford’s sacred choral music has remained one of the staples of church, chapel and cathedral choirs everywhere. On this new disc from Convivium Records, Malcolm Archer (director of chapel music at Winchester College) directs the choir of Winchester College Chapel in a varied programme including the Benedictus and Te Deum from the Service in C, the Three Latin Motets, Op.38, and anthems For lo, I raise up, Op.145, Come, ye thankful people come, If ye then be risen with Christ and The Lord is my Shepherd. The organist is Jamal Sutton, assistant director of chapel music at Winchester College.

Born in Dublin in 1852, Stanford’s initial musical education was at Christ Church Cathedral and St Patrick’s Cathedral. He received an organ scholarship to Queen’s College, Cambridge in 1870 and moved to Trinity College, Cambridge in 1873 and revitalised the choir there. Throughout his life, Stanford returned to church music and one of the reasons why the music has remained so enduring is the outside influences he brought to it so that, for instance, his services are sometimes symphonic in their treatment.

The programme on this disc is quite varied mixing sacred songs and anthems, with music from the Service in C and Stanford’s late Three Latin Motets. The programme mixes the various elements up so that the three Latin motets are scattered through the disc.

We open with the Benedictus in C from Stanford’s Service in C which was published in 1909 and represents one of most cohesive attempts to bring thematic and structural unity to the rather diverse mix of movements in the morning, evening and communion services. Immediately we can appreciate the fine, soft-grained tones of the young tenors and basses in the choir, combined with the bright toned trebles. They are all nicely flexible in Stanford’s canticle. This is followed by Beati quorum via, a six-part motet from Three Latin Motets and very much choral favourite. Here is receives a finely shaped performance, with nicely fine-grained tone.

Hush, my dear, lie still and slumber is Philip Moore’s adaptation of Stanford’s song Golden Slumbers given a new text by Isaac Watts and here sung by the trebles with a confident solo by Angus Armstrong. The result has the gentle melodic appeal which characterises much of Stanford’s work. The companion Te Deum in C comes next, and here Stanford needs all his skill to make the wordy text of the Te Deum fit a musically satisfying structure. The choir sings with robust, confident swagger and it is noticeable how much unison, or near unison, Stanford uses.