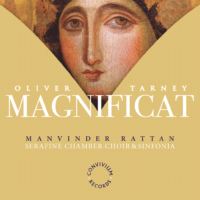 Review by The Quarterly Review

Available from Convivium Records and recorded at the Church of the Holy Spirit, Clapham, South London, Tarney’s choral-orchestral work is a highly-accessible (twelve-part) confluence of several spiritual traditions – the composer keen to find common ground between “the three Abrahamic religions” and, as he writes in the sleeve notes, “a proclamation of ecstatic joy… a symbol of faith in the face of uncertainty and of strength in the face of adversity”. Bringing this music to the recording studio is an inspirational conductor, and teacher of community choirs, Manvinder Rattan, and the Serafine Chamber Choir and Sinfonia (a new ensemble for this reviewer). The Magnificat has percussive, modern gestures – a reminder, perhaps, of the style of Karl Jenkins (well known for rhythmic choral works, such as The Armed Man) – but also moments that bring to mind the style of Benjamin Britten and the pure “holy water” of veteran Estonian composer, the deeply-religious Arvo Pärt. There is much for the choir and soloists to do in the manner of a large-scale oratorio, but I feel that it is in the private, reflective, mysterious moments of the score – the parts when the music feels like a whisper or a confiding of an idea – that Oliver Tarney reaches a true depth of feeling.

The Quarterly Review was founded in 1809, as a counterbalance to the Whig Edinburgh Review.The founders included George Canning (later a Conservative Prime Minister), Robert Southey (later Poet Laureate) and Sir Walter Scott, and it was published by the eminent London publisher John Murray. It became one of the 19th century’s most influential journals.

Its first editor was William Gifford, a former seaman and cobbler’s apprentice from Derbyshire. A benefactor paid for Gifford to go to college (he graduated BA from Oxford in 1782). He made a name as a satirist, and was appointed editor of Canning’s Anti-Jacobin in 1797. He became the best-known Tory polemicist of his day, and a noted translator of Juvenal. A later editor was John Gibson Lockhart, Walter Scott’s son-in-law, whose Life of Scott is regarded as one of the great biographies.

The Review launched the career of Jane Austen, and contributor John Wilson Croker penned such a blistering review of John Keats’ Endymion that he was actually blamed for his death – “snuffed out by an article”, said Byron. As well as Scott, Southey, Canning, Gifford and Croker, QR contributors included the Duke of Wellington, Lord Salisbury, William Gladstone, Matthew Arnold, George Borrow, John Ruskin, Ugo Foscolo, Henry James, John Buchan – and innumerable other arbiters.

The Quarterly Review was revived in 2007, under the aegis of former Conservative MP Sir Richard Body, who is Chairman of the Editorial Board. It appeared as a print journal between Spring 2007 and Autumn 2011 – PDFs of all issues are available at our Archive page – but like many other journals it has migrated to the internet.

The site contains a mixture of in-depth political essays on important and controversial subjects, written by leading intellectuals and opinion-formers. Our writers have included leading academics and public figures as well as a range of new writers.

There are also book reviews, features on music, film and classic books, and poetry, plus rare articles from the QR archives.

The aims of the revived QR are the same as that of its forebear – to provide counter-intuitive writing for people.