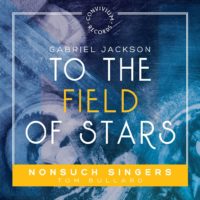 Gabriel Jackson: To the Field of Stars (CR032)

It was only a few months ago that belatedly I caught up with a recording of Gabriel Jackson’s To the field of stars.

That was a recording made in February 2014 by the S:t Jacobs Chamber Choir, one of the three choirs that co-commissioned the piece. It’s not all that often that a substantial modern choral work quickly receives a second recording but here we have a second account of Jackson’s work, made within a few months of the Swedish version. The Nonsuch Singers gave the UK premiere of the work in October 2013 and with commendable enterprise they’ve chosen to make it the centrepiece of their debut recording.

I was very taken with To the field of stars when I first heard it in the S:t Jacobs recording. However, the opportunity to experience it again in a second performance and also to listen to each movement, as I have done, side by side, in both recordings, has significantly increased my admiration for the piece. I’ve heard a lot of Gabriel Jackson’s choral music but I’m inclined to think that on two levels To the field of stars is the most fantastically imagined of all his pieces.

In the first place the concept is brilliantly original. Faced with the opportunity to compose a piece inspired by the centuries-old pilgrimage to Santiago de Compostela, he made a deliberate choice, as he put it, not to “write a literal account of the journey.” Instead, he used the pilgrimage as a stimulus for a work about “journeying in the wider sense – the physical, emotional and psychological struggle to reach a long-sought-after and life-changing goal.” Having taken that decision he has assembled an amazingly varied text, drawing on sources as diverse as a medieval guide to pilgrims, Christian texts in praise of St James and verses by Walt Whitman and Emily Dickinson. There’s even room for some words about Santiago de Compostela by the second President of the United States, John Adams (1735-1826). That text selection indicates a composer who is seriously well-read and who has the flair and skill to bring together these widely varied elements into a convincing whole.

The second way in which To the field of stars is fantastically imagined is in the music itself. Jackson writes for mixed chorus with independent parts for a solo cello and a pair of percussionists. He uses these resources to produce exciting music and an amazingly rich range of textures. The score constantly stimulates, intrigues and delights the listener’s ear.

As there is much to discuss in this review I don’t propose to describe the eight individual movements in detail. For that description I refer readers to my review of the S:t Jacobs recording. It’s very interesting to compare the two recordings. The Swedish choir is a bit smaller than the Nonsuch Singers. The British choir numbers 41 (14/11/7/9) whereas there are 33 Swedish singers (9/6/10/8). The Swedish performers are recorded more closely than their British colleagues. This has some benefits – mainly in terms of additional clarity – but all is not gain, as we shall see.

There’s a prominent part for a solo cello in this score. Both performances benefit from the involvement of a superb cellist. Kate Gould, who plays for the Nonsuch Singers, is a highly experienced and accomplished player. Among other things she was a founder member of the recently-disbanded Leopold String Trio and is a regular player with the Chamber Orchestra of Europe. Jackson has written a highly demanding part and Ms Gould seems to be in complete command of it. The cello on the Swedish performance is also marvelously played but I now feel, having heard the two recordings side by side, that Erik Uusijärvi is a bit too up-front by comparison with Kate Gould. I’m absolutely certain that this is the result of the recorded balance and not his playing but there are a number of occasions when one can hear the ‘scrunch’ of bow on string as he plays. Once or twice, especially during the third movement, ‘Pilgrim’s Song with History Lesson’, I found the sound of the instrument uncomfortably strong though I repeat that I’m not criticizing the player. Kate Gould’s sound integrates better with that of the Nonsuch Singers.

As I said, the Swedish choir is the more closely recorded of the two. The impact and presence of the recording emphasizes the tightly focused sound of the S:t Jacobs Chamber Choir. They really are a most accomplished ensemble and they surmount all the challenges of Jackson’s writing with seeming ease. You can hear even more detail in their performance than is the case with the Nonsuch Singers. However, the British group is also highly accomplished. Moreover, the fact that they are placed further away from the listener and in a more resonant acoustic means that the choral sound has more of a pleasing ambience to it. With the Nonsuch performance you have the sense of being present at a performance seated a few rows back. I think I’m prepared to sacrifice some clarity and detail for the warmer atmosphere. Also I think there’s no denying that a combination of excellent, nuanced singing and a more pleasing acoustic means that the British choir can more readily impart a sense of magic as, for instance, in the sixth movement, ‘Our journey had advanced’. In the next movement, the remarkable ‘Campus stellae’, Jackson has the choir murmuring the names of a multitude of stars. Thanks to the recorded balance there’s rather more definition in the singing of the Swedish choir but I think the British choir takes the palm here. The more resonant and slightly distanced recording means that their sound is rather more suggestive of the vast expanse and the unknown quantities of the starlit sky.

Make no mistake, these are two formidable performances of an amazingly inventive score. If I were forced to deliver a verdict then I think I would have to say that the singing of the S:t Jacobs Chamber Choir has a slight edge over the Nonsuch Singers in terms of discipline, precision and all-round expertise. It’s a close call, though, and the balance is redressed by the respective recordings; I prefer the sound of the present Convivium disc, which I think is better suited to the work. That said, I’m glad I first became acquainted with the work through the Swedish recording because the clarity and immediacy of the sound helped me to appreciate the inspired quality of the music.

What sways my vote, however, is the question of the couplings. The remainder of the Swedish disc is devoted to two more contemporary scores which continue the theme of journeying. I’m afraid I didn’t warm at all to Hans Schanderl’s Pilgrimage – Lang ist die Zeit und weit die Weg though I enjoyed Enrico Miaroma’s Farewell rather more. I feel that Tom Bullard’s choice for the remainder of his programme is much more imaginative and complements To the field of stars much more effectively than do the pieces on the Swedish disc. In fact all of the other pieces were performed in the concert at which the Nonsuch Singers gave the UK premiere of To the field of stars in October 2013. Tom Bullard has chosen pieces that continue the theme of the stars and the heavens.

The last movement of To the field of stars is a rich elaboration of Victoria’s motet O quam gloriosum est regnum so it’s absolutely logical to preface Jackson’s work with this piece. Indeed, it heightens greatly the impact of Jackson’s finale when we’ve already heard Victoria’s piece – and hearing that music before and at the end of To the field of stars strongly increases the sense of a journey. The Nonsuch Singers do the Victoria well. My one reservation is that the choir seems a bit large for the music in this resonant acoustic. I have a similar reservation about the other Victoria piece. I readily admit that this may be because I’m so used to hearing such music sung by small, expert consorts. I do wonder, however, if it might have been a good idea to reduce slightly the number of singers taking part; the sound is a little diffuse. That’s partly true of the piece by William Byrd also. However, this is a setting of Psalm 150 and despite – indeed because of – the slightly diffuse sound what the Nonsuch Singers achieve here is to convey the sense of the heavenly hosts praising God.

They do the short pieces by Pärt and Jackson very well and then finish with Jonathan Dove’s Seek Him that maketh the seven stars. It would be hard to think of a more appropriate way to end such a programme. Dove’s piece is a tremendous, brilliantly imagined composition. Tom Bullard and his choir give a really exciting performance in which I particularly admired their use of dynamic contrasts.

This is a distinguished debut disc and I admire not just the musicianship of Tom Bullard and the Nonsuch Singers but also their enterprise in choosing and then executing so successfully a most interesting and worthwhile programme. The disc is well engineered by Andrew Mellor while production was in the hands of Adrian Peacock, who is so vastly experienced in assignments of this nature. Gabriel Jackson’s note on To the field of stars – the same one which accompanies the S:t Jacobs Chamber Choir disc – offers an excellent introduction to the work while Tom Bullard has written good notes on the remainder of the music. I hope we shall hear more of this fine choir on disc before long.