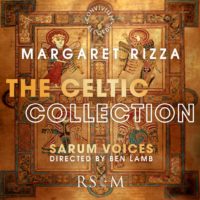 It is not always perfectly clear what is meant by describing something as ‘Celtic’. Scholars have questioned whether the term is an appropriate one, yet have found across Europe certain similarities in lifestyle and artistic expression, especially in the first millennium after Christ. It is a question for historians whether we have projected back into history a Romantic notion of a civilisation that did not truly exist.

‘Celtic’ tends to be associated– especially in these islands – Irish and Welsh culture. The concept has developed beyond a fascination with Gaelic, Gallic and Welsh roots into an interest in ‘Celtic spirituality’, something which combines both Christian practice with some pagan traditions. It is often fused with ahistoric New Age ideas, which owe more to California than to the Gaeltacht.

What Margaret Rizza has done is to concentrate on the specifically Christian aspect of the ‘Celtic’ connection. Several of the works here are settings of prayers attributed to St Patrick, while others are traditional to Ireland. Some are modern, by Margaret Rizza, or David Adams.

Rizza began composition relatively late in life. For a quarter of a century she sang as Margaret Lensky – thereafter she worked in voice teaching and encouraging the formation of various choirs, including the London Camerata. She understands the voice – and it shows. She has a particular interest in music for spiritual, faithful and meditative purposes. The Royal School of Church Music has published much of her work and this CD has been produced under RSCM auspices.

The music itself is charming, in a conservative style deeply influenced by the sounds of Church music of the last thousand years. If one heard a single piece, it would be near impossible to relate it to a particular century, though the sensibility is often modern. No matter – this CD will give immense pleasure, especially for reflective moments. If there is a fault, it is that 79 minutes of music of similar pace and grace could be too much of a good thing, but the listener can dip in and out.

Performances are committed and excellent. Instrumentation is both skilfully deployed and well-blended with the voices. The Sarum Voices – 15 singers in all – have splendid articulation and bloom, and the recording venue suits the music very well. Production values are very high – there is nothing remotely amateur here.

I still have the faint niggle about the ‘Celtic’ claim, rather as I do when someone tells me that he has written a ‘new folk song’, which seems not a song to have risen out of the traditions of the ‘folk’ (whoever they may be) – but it does not diminish in any way my delight in this lovely, melodic and sometimes moving music.