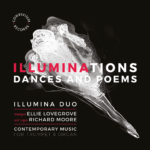 Trumpet and organ is a very common musical combination. Despite the rather large number of original duo compositions written in the 20th century, most recordings for this scoring fall back heavily on the hoary transcriptions that have long been staples of the genre. Even so, several of the more recent compositions have become standards, most notably the Czech composer Petr Eben’s Okna (Windows). By welcome contrast to many recordings, this CD by the British Illumina Duo (founded in 2012) concentrates entirely on relatively recent original works: three from the 2000s, one from the late 90s and one from the late 70s.

Though he has written in nearly all forms, American composer Dan Locklair (b. 1949) is best-known by far for his organ music and even has one work (the 1988 suite Rubrics) that has truly entered the standard repertoire. Two works of his are present on this recording, a trumpet/organ version of his PHOENIX Processional (a pleasant and reasonably straightforward piece of ceremonial music) andTrumpets of Light, a colorful four movement suite/sonata inspired by Bible verses about light. Many of the usual Locklair style elements are present: especially the grand and broad processional music with a slow pulse and the mixed meter splashy rhythmic toccata based on intentionally limited pitch material.

Two of the pieces were explicitly written for the Illumina Duo by young British composers: Five Poems (2014) by Paul Burke (b. 1988) and Silver Tree Fanfare (2016) by Solfa Carlile (b. 1985). Each movement of the Burke is inspired by a different (diverse) poem, and the result is a suite of varied character pieces. This substantial work (30 minutes) is the real high point of the CD—truly exceptional new music for this combination: attractive and compellingly put together throughout with both tremendous variety and tremendous integration. This is the best new trumpet and organ duo that I have heard in many years, and it deserves to be taken into the repertoire of many performers.

The Carlile piece plays with a kind of antagonism between the two instruments and is inspired by a Scottish variant of the Snow White story, specifically a narrative of “mother (Silver Tree) and daughter (Gold Trree) vying to see who would be the most beautiful queen.” Although a much shorter work (5 minutes) than the Burke suite, it is also appealing in its sound world and musical trajectory. Swedish composer Torbjörn Hultmark (b. 1957) wrote Triptyk in 1979; it is inspired by verses from Psalm 143. With its dramatic and aleatoric elements, it is music very much of its time, with the distinct spirit and sound of much concert music of the 1970s.

The disc was recorded in Portsmouth Cathedral, and the Nicholson organ is beautifully captured. The playing is uniformly excellent, and all the music is well chosen and shows great variety. The disc is worth it frankly for the Burke piece alone, which is a true stunner.