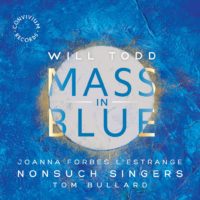 Nonsuch Singers, conducted by Tom Bullard, joined by soprano Joanna Forbes L’Estrange and L’Estranges in the Night (John Turville (piano), Alexander L’Estrange (bass) and Felix Higginbottom (drums), performed the programme of their new recording, with a few added extras.  Conductor Tom Bullard has had a wide-ranging singing and conducting career to date, but notably sang with the Swingle Singers for eight years, the last four as Musical Director.  It is this background that has most clearly informed his work with the Nonsuch Singers in not only the jazz-influenced Mass in Blue, but also in the range of close harmony settings and arrangements that formed the first half of their concert (the majority of which also appear on their CD).  When a predominantly classical, amateur choir moves into this territory, there are considerable possible dangers.  There can be nothing worse than hearing singers used to conventional rhythms, classical harmonies and being fixed to a score try to negotiate the freedom of swing and jazz settings.  However, it is a huge testament to the skill and enthusiasm of Nonsuch Singers, combined with Bullard’s commitment and clearly expert direction, that at no point did they appear out of their comfort zone.  Close miked and performing a good number of the settings from memory, they performed the complex and challenging arrangements with ease.

Ward Swingle’s arrangement of the Gershwin classic Love Walked In was delivered with smooth ensemble and warm tones throughout, and their harmonic precision in All the things you are, another Swingle arrangement, was impressive, even if a few of the faster tempo pick-ups were not perfectly tidy.  A number of soloists emerged from the choral ranks in several of the pieces, and all performed with confidence, notably baritone David Whitlam and soprano Elena Anastopoulos, whose clear bell-like solo in Li’l Darlin’ was particularly impressive.  They were also joined by soprano Joanna Forbes L’Estrange (another ex Swingle singer and musical director) in several numbers, such as the classic On a Clear Day and the moving How do you keep the music playing, an arrangement of a song by Michel Legrand who sadly recently passed away.  In the latter, Joanna Forbes L’Estrange’s delivered the beautifully simple song over subtly controlled and soft-toned choral backing.  Forbes L’Estrange also performed a couple of solo pieces with the trio, including Ward Swingle’s classic arrangement of Bach’s Largo (from the Harpsichord Concerto in F minor, BWV 1056), which sadly feels somewhat dated, but was given a warm and expressive performance here.  In contrast, her own composition, 21st Century Woman, composed for International Women’s Day 2019, and inspired by Oprah Winfrey’s 2018 Golden Globes acceptance speech, had conviction and energy, backed predominantly by the female Nonsuch voices.  The track was released as a fundraiser for Her Future Coalition, a charity providing shelter, education and employment to girls in India who were victims of human trafficking and gender violence, and apparently it was the first recording session at Abbey Road Studios of a song which was written, conducted, sung, played, engineered, produced, mixed and mastered entirely by women (more about the single and how to buy it here).  They finished their first half with a rousing big band number, Back Bay Shuffle, followed by a lively encore, Chattanooga Choo Choo, in which Tom Bullard got to sing, backed by a close harmony quintet (including Joanna Forbes L’Estrange) and the full choir.

The centrepiece of the recording, the Mass in Blue by Will Todd (b.1970), formed the second half of their concert.  Since its composition in 2003, the work has become very popular with choirs, and has already been recorded at least once previously.  Todd takes the Latin mass text into the world of jazz, with 12-bar blues rhythms, improvisatory melodies and layers of bluesy harmonies.  It is a predominantly upbeat affair, which at times feels slightly at odds with the text – the Kyrie is probably one of the most lively settings, and Miserere nobis in the Gloria is incongruously jolly.  But in its most exuberant moments, such as the lively Gloria and emphatically convincing Credo, which makes an unexpected return at the work’s conclusion, it does have an infectious energy which is hard to resist.  The mass exists in versions for full jazz band, and string orchestra with jazz trio.  Here it was performed in a version for jazz trio, and L’Estranges in the Night complimented the choir’s energy and enthusiasm well.  Pianist John Turville deserves particular mention for his gloriously laid back opening to the Sanctus and the Agnus Dei.  And Joanna Forbes L’Estrange added her beautifully souring soprano voice over the top of the choir in the Kyrie, as well as a warmly bluesy and improvisatory Agnus Dei.

This was an evening of impressive performances from all, but special congratulations must go to Nonsuch Singers and Bullard for achieving the rare feat of pulling off the transition into the world of jazz and swing with such skill.  Their recording of the Mass in Blue and the majority of their first half programme is strong, and will I am sure do well.  They return to more conventional choral territory – Rachmaninov’s Vespers – in July (details here), but I am sure they will continue to build on their varied and wide ranging repertoire.  I look forward to hearing them again soon!