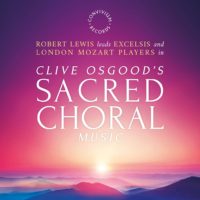 Clive Osgood is perhaps not a name well known to everybody, but this disc of his sacred music on Convivium Records should help change that. Robert Lewis conducts the choir Excelsis and the London Mozart Players along with soprano Rebecca Moonin a programme which includes Osgood’s setting of the Dixit Dominus, Beatus Vir and Miserere Mei alongside a series of smaller scale English anthems.

Osgood studied music at the University of Wales and the University of Surrey, as well as having an organ scholarship at Salisbury Cathedral. He is currently director of music at St Bartholomew’s Church in Haslemere and teaches music at the Reed’s School, Cobham. He is involved in amateur music making in the community, and many of the smaller pieces on the disc were written for such groups, so that Brightest and Best was first performed his choir at St Bartholomew’s Church, and Come, my Way, my Truth, my Life was premiered by the Llandaff Cathedral parish choir. His carol Alleluia! A new work is come on hand was one of six works shortlisted in the 2016 BBC Radio 3 Carol Competition.

I could well imagine Osgood’s music being popular with such groups, he writes attractively melodic music which always has an imaginative use of texture. He also writes well for voices, creating imaginative music which is accessible yet satisfyingly challenging for non-professionals is tricky and without having seen any of Osgood’s music, it sounds as if he succeeds admirably.

He is fond of adding something to the mix whether it be a piano, oboe, solo violin or a solo soprano. Rhythms are often catchy too, and in the multi-movement Dixit Dominus, the longest work on the disc, we get a distinct sense of the choral part being contrastedwith catchy and engaging rhythms in the orchestra.Whilst the music is melodic, with tunes, he does not not write many ear worms as such and there is often an interesting complexity to Osgood’s writing. I was rather fond of the eight-part unaccompanied setting of the Miserere Mei which seems more concentrated and intense and less intent on being ingratiating.

It is often tricky to assess a composer from a large selection of smaller pieces written to be useful, and it is good to have bigger pieces on the disc. Osgood’s Dixit Dominus for choir and string orchestra certainly has a lot going for it. With six movements each exploring a different selection of melody, rhythm and texture, the results were highly engaging, and I think that choirs and audiences will respond to the slightly musical theatre nature of Osgood’s writing here, without it every becoming too self-conscious. But I did worry at times about the match between musical emotion and the words, and felt that Osgood sometimes seemed to be aiming at a good musical event rather than heightening the meaning of these complex words.

Beatus Vir for choir, strings and soprano soloist, is a thoughtful piece which combines lushness of texture, with an attractive sense of propulsion and a melodic immediacy which pushes the piece a little towards the popular. This sense of the popular can be heard in items like The Peace of God  which was performed in 2014 by his school chapel choir as part of the school’s bicentenary celebrations, The Brightest and Best and Lord, for thy tender mercy’s sake. All three are a finely written pieces the cast of whose melodies and piano accompaniment suggests a comparison with popular worship songs.

Osgood is well served by his performers. Robert Lewis gets engaging performances from Excelsis, the choir of which he is leader, along with the ever admirable London Mozart Players. There are one or two moments when the singers of the choir sound a little taxed by the music, but overall the performances are wonderfully confident and sympathetic, with the members of the London Mozart Players responding to Osgood’s lively rhythms. Soprano soloist Rebecca Moon sings with a vibrant lyric voices and copes admirably with the sometimes high tessitura of the soprano lines.

This is a disc full of engagingly melodic music, written in an intelligent yet approachable way. There is plenty to delight audiences here, but I suspect also that the pieces are just as enjoyable to perform and choirs should be on the lookout for Osgood’s music.

Convivium Records is a private recording, production, and distribution label, based in London, UK, provides cost conscious opportunities for composers, performers, educators and students to release and market their music on disc and online globally to professional studio standard. With a range of label artists from contemporary British composers to cathedral choirs, performers and vocal ensembles, the label offers expertise across all aspects of private and commercial productions, with a team of engineers, performers, directors, producers and designers supporting projects from concept to album delivery and marketing.

Will Todd: Mass in Blue – “Nonsuch Singers get into the groove very convincingly” ★★★★ (Choir & Organ)