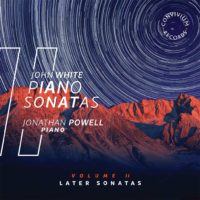 Jonathan Powell is one of the most powerful, intelligent pianists around today. His technique seemingly knows no bounds, while his ability to grasp the essence of music by little-known composers makes him the ideal interpreter for challenging, obscure repertoire.

Born in Berlin in 1936, John White boasts a huge catalog of works, including 180 piano sonatas (No. 1 dates from 1956); the pieces on this recording range from 1980 to 2008. He studied composition at London’s Royal College of Music with Bernard Stevens. There is a laudable range of reference in this music: The first sonata we hear, No. 105, is indebted to Busoni and Gershwin, for example: Its granitic opening clearly invokes the former and then, as the work scales its way up the registers, the bluesy Gershwin influence begins to make itself known. Powell tracks the work’s shape perfectly, pointing us perhaps at one point towards Messiaen, too. The Sonata No. 123 is intriguing due to its use of a speeded-up opening to Beethoven’s Fourth Piano Concerto. The composers Alkan, Medtner, Scriabin, Tchaikovsky, and Reger, to name several, hover in the background, as does Bill Evans in the laid-back No. 132. The once-popular song Whispering forms the basis of No. 146. But perhaps the largest shadow, albeit way back, is Scarlatti: one-movement keyboard sonatas, each individual and yet each identifiably from the same pen.

Dance is a part of White’s vocabulary: He has been active in the dramatic arena, and has also performed as bass trombone with the Royal Ballet Touring Orchestra. The dark Waltz of No. 106, with its delicate, high-lying central section, or the harmonically intriguing classical ballet adagio of No. 107, beautifully restrained yet sonorous in this performance by Powell, both point to this. Although written for the Royal Shakespeare Company, Sonata No. 127, “On Theme from Les enfants du paradis” comes from the same world, while from the same show, No. 136, sounds impeccably French, straight from the world of Les Six (there is a cheeky nod to Busoni in there, too, though). And what a performance Powell gives of No. 136, bright, unfettered by the studio conditions; it sounds like the perfect encore after a long, and far more serious, recital. More dramatic are the foundations for No. 138, its material taken from a stage production of Molière’s Les fourberies de Scapin, and the music seemingly graphic (gruff low register for the grumpy old men). White’s later experience of electronic music can inform his music, too: No. 120 offers a piano equivalent to the step-time sequencer.

I for one have never seen a piece with the word “gosh” in the subtitle, but such is the case with the Sonata No. 133, “Gosh, Howard,” a birthday tribute to fellow composer Howard Skempton. Hardly surprising that one of the sonatas dedicated to Powell No. 152, is a very miniature (less than three minutes) concerto. But in that short time span, White and Powell offer a breathtaking tour de force; one needs the delicacy and nostalgic fantasy of No. 153 (which originated in some stage music for Chekhov) to relax.

What I personally love most is the basis for Sonata No. 156, “Chorale with moving bass.” The somewhat dry subtitle belies the inspiration: the fact that White thought that Jonathan Powell needed more boogie in his life (don’t we all, to be honest?). So it is that an upper-voice chorale is heard against a boogie bass; a terrific piece, performed in appropriately unbuttoned fashion (and yet, still technically perfect). The more whimsical nocturne-like Sonata No. 164 is an appropriate reminder of the profundity at the heart of White’s output.

This is Volume Two of White’s Sonatas; the first appears not have been reviewed in Fanfare, although collectors may be familiar with White’s piano output via a disc of sonatas played by Roger Smalley on NMC, or indeed a Lyrita disc where Colin Kingsley played four very early Sonatas (Nos. 1, 4, 5, and 9) sharing the disc space with piano works by Alun Hoddinott.

I have just one small caveat to the presentation: The commentaries to the individual sonatas are not linked to the relevant tracks. What is important, though, is the music, and what we have here is an excursion into John White’s kaleidoscopic mind with a superlative pianist, Jonathan Powell, as guide, all in superb recorded sound.