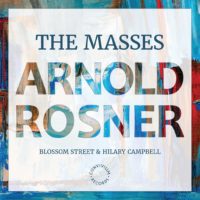 Arnold Rosner produced a number of choral works across his composing career. These range from a concert-length Requiem (with large orchestra and non-traditional texts) to a few smaller sacred motets. The chorus also figures heavily in his grand opera, The Chronicle of Nine. Three of his most significant and representative choral works are the three cantus firmus polyphonic masses. Rosner wrote the following comments about these works:

“Between 1967 and 1974, I wrote three traditional settings of the Roman Catholic mass for unaccompanied choir. In my youth I was at first attracted to traditional repertoire. But as soon as I heard the music of the Renaissance and early Baroque I was entirely taken with it. This material surpassed for me (and indeed continues to do so) the more tonally predictable music of the late Baroque and Classical periods. So I wrote several instrumental pieces imbued with devotional feelings and a modal harmonic style, culminating in Symphony No. 5, something of a mass without voices. The three a cappella choral masses may hearken somewhat to the styles of 400 or so years ago — as if Josquin and Lassus were just a generation past — ignoring vast musical universes in between. I argued that neo-modal masses had been written by Vaughan Williams in 1922, Stravinsky in 1948, and there were admittedly youthful, but creditable, attempts by Ginastera and Martin. But my masses were as far from timely as they could be during the atonal age in which they were composed. Then into the bargain was added the notion of ‘where did it come for a composer of unmixed Jewish descent to write Catholic masses?’ When asked, I would simply respond ‘We are all God’s children, and music is my religion.’ “

From examining Rosner’s sketchbooks and manuscripts, it is clear that the first of these masses, Missa Greensleeves, Op. 34 (1967), began to emerge while Rosner was taking a course in modal counterpoint during his graduate studies in Buffalo. Some of the music can be found written in between notebook pages containing traditional counterpoint assignments. Rosner’s interest in “early music” in general had begun previously. But it was during these Buffalo years that he studied this repertoire in a formal academic way. There, he was also exposed to the university’s early music ensemble. (Missa Greensleeves is not included on this recording and the style of the work, while still certainly Rosnerian in many places, is much closer to the Renaissance models.)

It is in the next two choral masses, Missa L’homme armé, Op. 50 (1971) and Missa In nomine, Op. 62 (1974), that Rosner found a characteristically personal approach to the genre-blending Renaissance contrapuntal practice with his free approach to modality and his desire for the dramatic contrasts of romantic emotional expression. The result is music that is both deeply connected to traditional Renaissance models. At the same time, being completely different from them in the affectual language used and the moods created.

Like many Renaissance masses, each is based on a cantus firmus (a traditional melody) that appears throughout. The French secular song “L’homme armé” (The Armed Man) and the “Gloria tibi trinitas” plainchant (pieces based on which have long been called “In nomine.”) Unlike most Renaissance masses, Rosner uses the cantus firmus melody. Not just in a traditional manner (long-note interior parts) but also motivically/melodically in the manner of post-Renaissance music.

The music throughout the Rosner masses varies widely: pillar-like triadic edifices (something Rosner explored in many of his compositions); complex counterpoint; asymmetrical meters; proportional rhythmic relations; hushed, distant textures; and powerful, energetic ecstasy. Given the musical extremes that are found (and the modal freedom), the music is extremely difficult to perform. The Missa Greensleeves was performed by a student choir at Buffalo during Rosner’s graduate studies. But only one movement of the other two masses was ever performed in the composer’s lifetime. Editor Carson Cooman and engraver Jeffrey Grossman worked with the composer to prepare authoritative editions of the works in 2008.

Rosner was a lifelong pacifist who was, like many Americans of the time, deeply troubled by the Vietnam War. He expressed his deep and uncompromising pacifism in several musical works, including A My Lai Elegy, Op. 51 (1971, rev. 1993) and with the dedication of the aforementioned Symphony No. 5 (a symphonic cantus firmus mass for orchestra alone) to George McGovern, a United States senator and 1972 presidential candidate who was an outspoken opponent of the USA’s involvement in Vietnam. Rosner was asked about the extroverted “Dona nobis pacem” that ends the Missa In nomine. All other masses, including the symphony, end quietly. He said it was a joyous response to the official US withdrawal from Vietnam via the January 1973 peace agreement.

As a college student in 1962, Rosner was asked to compose incidental music. This was for a production of Cycle of Spring by the Bengali author Rabindranath Tagore. The incidental music served its purpose for the production and was then put aside. But its musical material and subject generated several subsequent works: an orchestral tone poem (Op. 23) and the third movement of his Piano Sonata No. 1 (Op. 25). A few years later, Rosner was pursuing his graduate studies and gaining further exposure to early choral music. At this time, he composed a set of Nine Tagore Madrigals, Op. 37 (1968). On this CD, the final madrigal Peace, My Heart is heard between the two masses. It is a sweetly beautiful setting of one of Tagore’s most famous poems.

For more information about the music of Arnold Rosner, visit: arnoldrosnermusic.com

In 2017, she began working at the Royal Academy of Music as a BMus Lecturer. She runs an annual project with Master of the Queen’s Music, Judith Weir, alongside Blossom Street & the RAM composition department

In addition, she is conductor of P&O Ferries Choir, the group which won the BBC2 series The Choir, and which she met whilst filming for the series.

Following her studies, she returned to the RAM as the Meaker Fellow 2012-13. She was the first choral conductor to have been thus honoured. In 2018, the Royal Academy of Music (ARAM) made Hilary an Associate. In addition to her regular conducting work, Hilary also acts as an adjudicator, choral workshop leader and guest conductor. She is a founder member of the Voices of London Festival, and is also a published and prize-winning composer.