Cecilia McDowall: The Girl from Aleppo – “The passionate performance, directed by Dan Ludford-Thomas, catches the essence of the story” ★★★★ (Maisie Scannell, Musical Opinion) 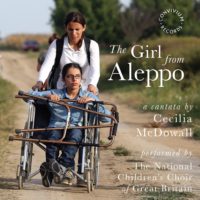 The girl from Aleppo, composed by Cecilia McDowall for the National Children’s Choir of Great Britain, tells the astonishing story of Nujeen Mustafa. A Syrian refugee with cerebral palsy, aged 16 she travelled to Germany from her war stricken home in Aleppo, a 3593-mile journey in an old wheelchair pushed by her sister. The youthful voices give the piece a touching poignancy whilst the sparse accompaniment of piano and violin provides an intimacy, a personal connection with the narrative that would be lost with an orchestral setting. Though sounding slightly too echoey at times, the open acoustics of the Hall do capture the enthusiastic voices of the National Children’s Choir.

The first movement, Orphans of the World, introduces Nujeen’s struggles. The foreboding violin opening, which is played beautifully and with real feeling by Harriet Mackenzie, portrays Aleppo’s derelict landscape and Nujeen’s escape darkly yet endearingly. The words strike a careful balance between poetry and childlike wonder “I often dream about being an astronaut. Floating in space, your legs don’t matter”. Interjections of violin serve as grave reminders of the horrors she is escaping throughout this well-composed movement, with its literal and emotive lyricism. The musical underlay reflects her story throughout the cantata, nowhere better than in ‘Thousands milling at the border (The Journey) – depicting the commotion at the border – and ‘I’d never seen the sea before’, the musical imagery imitating the sounds of crashing waves.

A lost tribe pushed from border to border is darker and more chaotic. Though McDowell does well to illustrate the horrors of the refugees’ desperation, perhaps her greatest feat in this movement is not in the heavy textures, but in the way the music dissipates into something lighter. During the words “the policeman smiled”, a simple yet beautiful piano motif arises. It is a sudden jolt from the urgency shown through the children’s voices, expressing immense relief as they reach safety in Germany.

Everyday Wonders is wonderfully melodic – more so than the other movements. It works as the finale, conveying the joy Nujeen and her sister feel, particularly evident in the sprightly emphasis on the words “skipping and singing”. There is love for mundane things such as brushing teeth and going to school, even “red subject folders” are something to be thankful for. But we then returned the ominous violin solo that greeted us at the start, a reminder of Syria and how Nujeen is as new to her surroundings as they are to her. The cantata has come full circle, but still manages to reach a brilliant conclusion in which every child’s voice rings out, “singing the song of life itself”. The passionate performance, directed by Dan Ludford-Thomas catches the essence of the Story through children’s eyes and Convivium’s recording is exceptionally clear.