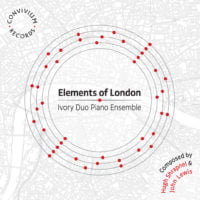 John Lewis and Hugh Shrapnel are pianist composers, friends who wrote two piano works to play with each other, including the 17 pieces found here on a Convivium disc entitled Elements of London. They have different musical personalities as we can both see in their titles and hear in their pieces. All but one of Shrapnel’s works are part of an ongoing series called Tales of South East London. The exception is the opening number on Elements, Shrapnel’s short Square Blues. It’s a blues played over a stolid left hand playing in a rigid 4/4. It is, in other words, a square’s version of the blues, without swing. I find it amusing. Shrapnel is often playful, as in his At the Rivoli, which he calls a lopsided waltz. The Rivoli is an extant 1950s ballroom: Shrapnel imagines an elderly couple trying awkwardly to revive their youth with this dance. 3rd Lamp Post in Tressillian Road is a kind of quick march with fast-moving two-handed chords alternating with a comical theme in the right hand. Shrapnel tells us we have to make up our own story for that one.

Not so with In Memory of Jane Clauson. Clauson was a teenaged girl, a maid to a family and, in her early teens, the sexual partner of one of the family’s sons. When the elders found out they fired her. She got in touch with her lover, and told him she was pregnant. He then murdered her with a hammer. He was never convicted, despite the outrage of the neighborhood. Over the 17-year-old’s grave is a statue of a crouching child. It’s the statue that inspired Shrapnel’s piece, which begins with quiet single notes that sound as lonely as the young maid must have been. There’s a more active, song-like middle section. In the end the single notes get increasingly soft until they seem to disappear. At Jane’s funeral, the pall bearers were all dressed in maid’s uniforms. Shrapnel also has written two pieces based on a local political controversy over a plan to downgrade a neighborhood hospital.

Lewis was in his youth an aspiring chemist. His eight pieces are all (strangely) named after elements. If you are like me, you’ll have to look them all up. They can be fierce. “Fluorine,” for instance, is what the composer calls “an extremely violent piece, full of giant clustery chords and savage rhythms.” Lewis’s pieces are typically more rhythmically active than Shrapnel’s, even the relatively innocent “Cerium.” To my American ears, “Phosphorous” sounds in its opening pages a bit like Gershwin. “Mercury” is also rhythmically insistent. with a rapid-fire melody high in the treble.

The two pianists recorded here call themselves the Ivory Duo Piano ensemble. The booklet has a photo of the two composers bending over the piano together. The Ivory Duo is fine, but I’d still like to hear the composers’ versions.