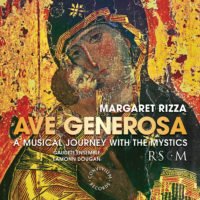 As the subtitle of this disc implies, Margaret Rizza’s sacred music is not designed for use in religious ceremony or ritual. If it has a ‘use’ it is as an aid to private prayer and Christian contemplation. In a 2001 interview with Sally Harper (available on Rizza’s website) the composer says “All of my music is underpinned by prayer – which can consist of doubts, anxieties, desert stones . . . but also deep joy and gratitude and glimpses of something that I can’t quite put my hand on… something not of this world?”. She was (as Margaret Lensky) a professional singer for 25 years and a teacher at the Guildhall School from 1977 to 1994, but it was only in 1997 that Rizza began to compose. I quote again from the same interview: “Pamela Hayes RSCJ, a sister of the Sacred Heart Community with a deep spirituality but also a profound humanity whom she first met at the Christian Meditation Centre in London, asked Margaret to write the music for an international conference. At this stage she had only ever produced a couple of tiny pieces for the music group at her local church of St Thomas of Canterbury in Sevenoaks, and she felt that more ambitious composition was simply beyond her. Her response to the challenge crystallizes much of the personal journey up to that point. For two days she struggled to compose and nothing came: ‘my mind was just filled with the old ego right out in front?’ But on the third day she turned to silent meditation, and in the silence the Spirit was allowed to speak, and the music began to ‘bubble up’. Six pieces resulted. She is adamant that this is the only way she can compose. ‘My music is birthed through silence. It is rooted in this way of prayer, even though each piece I compose can be a challenge, and sometimes it is an uphill struggle to write down what the Spirit is trying to express.’” She had, since 1986 been working with the World Community for Christian Meditation, leading retreats, prayer and music days and had been busy with many music outreach projects in the community. Her music has found a number of knowledgeable admirers, such as Harry Christophers. Some readers of MusicWeb will have heard her work ‘Ave Generosa’, which was commissioned by Christophers and recorded, under his direction, by the Sixteen, on their album A Mother’s Love.

Audible influences in Rizza’s music include Plainchant, early polyphony and the music of Taizé. She has also spoken of her admiration of Arvo Pärt and Morton Lauridsen. Such influences – though it is important to stress that none are so dominant as to make Rizza’s music merely derivative – coupled with the idea of music as an aid to contemplation, might sound like a recipe for New Age blandness. But that would be unfair to Rizza’s music. Her work’s precision and attention to detail put it at some distance from New Age music and its frequent vapidity. In her best pieces, there is a good deal happening, musically speaking. In reviewing A Mother’s Love I wrote that her work had “real substance and intelligence” and that her music was “subtle in its simplicity”. I have now heard more of Rizza’s music than I had then and have found no reason to change my mind about such judgements.

As befits a woman not exclusively committed to one Christian denomination, Rizza has cast her net wide in her choice of texts in the music recorded here. The opening track, ‘Veni Jesu’ sets words from Psalm 119. The second, ‘Fire of Love’ is a setting of an English version, created by the composer, of St. John of the Cross’s great poem ‘Canciones del alma en la intima comunicación de unión de amore de Dios’, which begins thus:

O living flame of love, so tenderly you wound
the deepest centre of my soul
(Margaret Rizza’s version)

Elsewhere Rizza sets texts by Hildegard of Bingen, Thomas Merton and John Main as well as the Greater Advent Antiphons, and further verses from Psalms 42 and 43 and from Proverbs 2:1-5 and Wisdom 7.7-11 & 14. The final work on the CD is a setting of a Trinity Blessing of Celtic origin. Sung texts (and, where appropriate, translations) are provided.

After several hearings of the disc, I am most moved by ‘Fire of love’ and ‘Mysterium amoris’. I was, I suppose, always likely to be susceptible to ‘Fire of love’ since, some years ago, I spent quite some time thinking about the poem when writing an essay on the poet Roy Campbell, who made a particularly fine English version of the Spanish original. (Borges thought that Campbell’s translations of St. John were superior to the original poems). Rizza’s setting begins with some resonant cello phrases, before their hints of exultation are picked up first by the choir and then by the soprano soloist (here the excellent Julie Cooper); there is a dialogue between soprano and violin before the tenor (an assured Simon Wall) ‘speaks’ of the bliss of eternal life. There follows a duet for violin and cello. Further alternations between solo voices, chorus and the instrumental ensemble ensure that the texture is always shifting and rewarding the listener’s attention. The music is at its most radiant in the affirmations of the final stanza of the poem, affirmations of the soul’s consummation in the Fire of God’s love. With all respect to Margaret Rizza, I don’t feel that her ‘Englishing’ of St. John of the Cross is quite on a par with that by Roy Campbell (though her music does justice to the Spanish original), so I cannot resist quotation of Campbell’s version of the last stanza:

What peace, with love enwreathing,
You conjure to my breast
Which only you your dwelling place may call:
While with delicious breathings
In glory, grace, and rest,
So daintily in love you make me fall!

‘Mysterium amoris’ sets passages from the prose – though the chosen passages have the imaginative power of poetry – of The Inner Christ, a book by the English Benedictine John Main (1926-1982). With its beautifully judged use of solo clarinet and oboe, along with the choir, and its interplay between stillness and movement, the setting does justice to words like “The meaning of life is the mystery of love”, “it is the roots of love that hold the ground of being together” and “By stillness in the spirit we awaken to the fresh sense of being, and we move into the oneness that is God”. Though the result is only just over five minutes long, the music and text of ‘Mysterium Amoris’ unite to produce a work of remarkable beauty and power.

The fact that I have chosen to discuss only two of this CD’s thirteen tracks in any kind of detail doesn’t, of course, mean that I think the other eleven works are of no interest. That is certainly not the case. There isn’t, to my mind, a single dull or uninteresting piece here. It is not, though, a CD to be listened to straight through. Since this is not music which makes grand or dramatic gestures, each work needs to be listened to carefully and surrounded by silence before and after; for me at least, each work repaid that care and receptive attention. Those who have previously listened to Margaret Rizza’s music will have spotted titles they are familiar with, such as ‘Ave generosa’, ‘Mary slept’, ‘Fire of love’ or ‘Oculi mei’. In, I think, every such case, these are subtly different settings – as Rizza notes in the CD booklet, “some of the pieces are reworkings of former scores”.

The recorded sound and the performances are all that one could wish for. The instrumental forces of the Gaudete Ensemble consist of clarinet and oboe, two violins, a viola and a cello, plus the organ. The instrumentalists, the choir and the soloists – who in addition to those I have already mentioned (Julie Cooper and Simon Wall) include sopranos Julia Doyle and Alison Hill, alto Kim Porter, tenor Matthew Beale and bass Matthew Brooke, all do what is asked of them very well. The CD is further enhanced by the presence on its cover of a reproduction of the famous and beautiful 12th century icon The Theotokos of Vladimir.