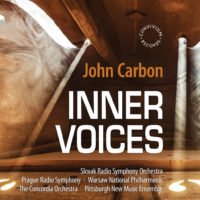 American composer John Carbon turns 70 in 2021 and this is certainly a good opportunity to survey some of his large-scale works in these recordings made over a 17-year period between 1992 and 2009. All the recordings in this twofer were previously released on MMC.

The Violin Concerto (1995) was written for the soloist in the recording, Peter Zazofsky. It’s a crisp work in three classically clear movements but full of attractive themes, sororities and textures. The central slow movement exemplifies its range best. It opens plangently but then one senses a nervous unease sweeping across the landscape. The soloist has little solo flourishes before the music is distilled toward the end of the movement, cemented by a violin recitative. Angular turbulence drives the finale, the music accreting in fits and starts in a jerky moto perpetuo. Zazofsky is a fine soloist, marshalling considerable reserves of tone as much as evincing an ability to demarcate the music’s shifting expressive contours.

The piece that lends itself to the disc title is the three movement Inner Voices. The movements are named Tigers, Phantom and Nightride and once again this is a Warsaw recording, though here Robert Black is the conductor, whereas in the Violin Concerto it was Gerhardt Zimmermann. The opening movement is terse and laced with percussion outbursts. There’s vivid intensity here that is resolutely and almost wholly grumpy in effect. The central panel, rather like the corresponding movement of the Violin Concerto, offers a reprieve from these elements but it’s not one without its own sense of unease, before there’s a resumption of the drama in a finale that matches the opening in insistence.

For the Piano Concerto the location changes to Prague where the soloist William Koseluk is accompanied by the Prague Radio Symphony Orchestra under Vladimír Válek. Cast in one movement but with three clear sections it offers the most sustained generosity of spirit of any of the three works on this first disc. Though it’s crisply rhythmic its sense of colour and strong chording can sound a little influenced by Rachmaninov. The central panel balances lyricism with impish scurry, much of it lovely, and a giocoso ending that encodes some Danse macabre elements and wit. I have to say this is my favourite Carbon piece in this retrospective though that might be because it’s the most expressive and historically-minded. Koseluk is a warmly sympathetic soloist and Válek is invariably a fine colleague to have on the rostrum.

Composed in 1992 Rasgos is a sequence of sketches for violin soloist (here Claire Chan) and chamber ensemble directed by Marin Alsop. Deftly and prismically orchestrated there is a sense of airiness and clarity in these compact studies which also admits some punchy elements as well as serio-comic moments, such as the finale. Chan is a dextrous soloist. In 1995 Carbon wrote Ghost Town Sketches which is played here by the Pittsburgh New Music Ensemble as they evoke the ‘ghostly western mood’ derived from cowboy songs collected by the ethnomusicologist Alan Lomax. Some are jaunty, others more elegiac, whilst some of the writing is scurrying or repetitive. The final work is Endangered Species for double bass and orchestra. The opening is somewhat Stravinskian, and the soloist for whom the work was written, Richard Frederickson, nimbly traverses a dark landscape or else flings himself into music that is more reflective of the Hunt. There’s also lyric music generously provided for a solo instrument more usually given galumphing material. With a bell toll prominent in the work’s later stages, we are left with ambiguity; if the double bass represents the large and wild creature of the work’s title, does he live or die at the end?

The booklet notes are extensive, and the musical biographies are full. All the performances stand up well and the recording quality is equally laudable. This bracing twofer offers a fine perspective on Carbon’s compositions in the nineties and very early 2000s.