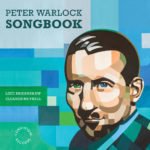 The composer Peter Warlock left a relatively small body of work, yet besides the well-known choral pieces and the handful of instrumental works including The Capriol Suite, he wrote around 150 songs, most of which seem to woefully ignored. Whilst periods of Warlock’s life were marked by gloom, depression, and inactivity, there were manic and creative periods too which could range from riding a motorcycle naked down Crickley Hill (in the Cotswolds near where he was living at the time) to creating his remarkable W.B. Yeats song-cycle The Curlew. Whilst some contemporaries saw a split Peter Warlock/Philip Heseltine personality, friends tended to see the division in terms of “Philip drunk or Philip sober”. And threading their way through his life from 1911 (when he was 17) to 1930 (the year of his death at the age of 36) are his songs.

For the Peter Warlock Songbook on Convivium Records, soprano Luci Briginshaw and pianist Eleanor Meynell bring together 28 of Peter Warlock’s songs. Luci Briginshaw’s selection of songs is deliberate and considered. At the outset she put to one side ‘all those songs about beer’, and the result is a selection which spans the years 1915 to 1928, arranged roughly chronologically. The poets selected are an eclectic mix, yes there is a fondness for English 16th and 17th century writers, but there is also W.B.Yeats, Robert Louis Stevenson, Ford Maddox Brown, Arthur Symons, Hillaire Belloc, a 19th century translation of Ancient Greek and names which are not so familiar nowadays such as Edward Shanks and Robert Nichols.

What is apparent from the first is Warlock’s distinctive voice. The Yeats setting from 1915, The Everlasting Voices is short but stylistically confident and remarkable in its seriousness and harmonic interest. Similarly, his first Shakespeare setting, Take, O take those lips away (from 1916) represents a willingness to rethink, there is little twee, folksy or neo-Baroque about this.

His song Heraclitus, setting Ancient Greek in translation, is remarkable for the intensity and seriousness, perhaps arising as the song was written after hearing that his friend Hugh Sidgwick had been killed in action in September 1917. It is remarkably poignant, and the piano writing evokes at times John Ireland. The Water Lily is another remarkable song, the last in the first group which all, in various ways, show the influence of Bernard Van Dieren and his explorations of tonality (and atonality). That is the remarkable thing about this group of songs, they largely eschew the stylistic traits for which Warlock is well known. There is little of the folk-inspired melody of Bethlehem Down, and not much direct evocation of period music from The Capriol Suite.

We are in more stylistic familiar territory with the evocation of period manners in Lullaby, another Take, O take those lips away, The bayliy berith the bell awayand the Byrd inspired My sweet little darling. but there is harmonic daring too and much interest.

Dedication (from 1918/1919) is dedicated to Warlock’s recently acquired love interest and it is certainly a big romantic effusion. We return to Yeats, for The Cloths of Heaven (1916), full of interest and harmonic ambiguity along with a fascinating melody which to my ears has Celtic evocations. The Singer is one of the few songs on the disc which have the simple directness of folk-song, and as ever Warlock is able to invent memorable musical material.

A group of five songs date from 1922, when Warlock was in rural Wales and produced his greatest number of songs in a single year. A Sad Song is again something of a modern take on an old-style melody, Sleep is in a similar mode with Dowland-esque writing tinted with a 20th-century sensibility. Autumn Twilightis completely different, dark and complex, it is through composer and full of romantic sensibility and harmonic inventiveness. But Rest, sweet nymph returns us to Warlock’s old-new style, as does Spring but the music is so delightful with such inventive rhythmic vitality that how could we complain.

Moving to 1923, To the memory of a great singer is Warlock’s revision of an older song, still inventive but ironing out some of the earlier harmonic daring, yet still with richly evocative harmonic touches. Consider was dedicated to the composer CW Orr and it has a busy and virtuosic piano part (again the voice of John Ireland seems to hover in the distance). I held a Love’s head uses a 17th century text, but this is all 20th century. Perhaps not as daring as Warlock’s earlier manner, but still impressive.

We return to period evocation with Pretty Ring Time (1924) and Robin Goodfellow (1926), the latter with a delightfully inventive piano accompaniment. In Ha’nacker Mill, Warlock turns to a contemporary poet, Hillaire Belloc, with an evocation of a past rural existence made more poignant by Warlock’s rich harmonic language. And Belloc is also the poet for the darkly mysterious The Night.

The Lovers Maze (from 1927) returns us to Warlock’s old-new style, but the writing for the piano is by no means straight forward as the composer delights in peppering things with ‘wrong’ notes. Cradle Song is somewhat folk-influenced, with lovely rocking piano, yet never obvious. The Contented Lover was written as a birthday present for a friend, it is somewhat romantic but coloured by rich harmonic touches.

The Thomas Wyatt setting, And wilt thou leave me thus? (from 1928) is securely contemporary and all the better for it. Finely imaginative, with a lovely freedom in Warlock’s approach to the music, this is a powerful song. Finally, on a more upbeat note, there is Youth, from the same year, old-new but with zest and imagination.

This is a beautifully curated group of songs, finely performed. Luci Briginshaw and Eleanor Meynell clearly care for this repertoire and every song on the disc is carefully considered and its high points brought out, from dark, harmonic intensity to perky neo-17th century. This is a disc to make us re-consider; why on earth have we not heard most of these songs before.