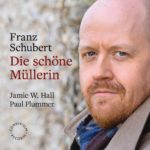 Baritone Jamie W. Hall has an established career as concert soloist, ensemble singer, and member of the BBC Singers, the only full-time professional British choir.

Like many performers, the pandemic has had a dramatic effect on his performing life, and in the early lockdown periods, he shared a regular series of solo performances, at home at his piano, in his dressing gown (#BathrobeRecitals on Twitter).

He also, along with fellow singers, streamed some wonderful song recitals on YouTube (Proud Songsters), with Hall performing a range of repertoire. But it was his performance, with pianist Paul Plummer, of Schubert’s (1797-1828) Die Schöne Müllerin that stood out for me.

Hall has clearly grasped the enforced restrictions on his musical life and turned them into an opportunity to explore the music in depth, developing his approach to the work to the extent that he then decided to record his interpretation, launching a Crowdfunding campaign (which I supported on the back of that online performance).

At over an hour in duration, Schubert’s Die Schöne Müllerin is an ambitious undertaking. It tells the tale of a travelling young man who falls in love with a miller’s daughter, only to be usurped by a huntsman, and the tale doesn’t end well, with our travelling man in despair drowning himself in the brook. The brook features large throughout the cycle, with watery, rippling piano accompaniments.

Schubert shifts the moods both harmonically and lyrically, and the singer must demonstrate a great range of emotions, from simple delight in nature early on, to tenderness, longing, full on passion, through to jealousy, even anger and ultimately desperation. Hall captures this wonderfully, and draws us into the tale from the outset, with a tender lightness of touch in the opening song, Das Wandern.

Hall gives us that sense of surprise and wonder in Halt! in the melody’s lilting swing, over the piano’s clatter of the turning mill wheels. Then as he falls in love with the miller’s daughter, Hall injects a sense of urgency and impatience in Ungeduld, as Plummer’s piano accompaniment stutters anxiously.

Passion builds in the turbulent Mein!, with an edge added to Hall’s warm tone, and the burbling brook has returned in the piano part. Later, Hall delivers the rapid text of Der Jäger with an air of breathlessness as the traveller see the threat of his rival, and this turns to jealousy, anger, fear and ultimately desperation in Eifersucht und Stolz (Jealousy and Pride).

But in the end, there is a tired resignation in Der Müller und der Bach, as he takes comfort in the brook, before the disturbingly calm final lullaby, Des Baches Wiegenlied.

Hall captures this range of emotions well, and tells the tragic tale with remarkable clarity as a result. The combination of Hall’s delivery and Schubert’s exquisite mood-painting is so transparently communicative throughout. I look forward to his Winterreise soon!

Will & Kate: Over the Rainbow – “The performances are impressive with clear, crisp diction” (Ian Munro, RSCM, CMQ)