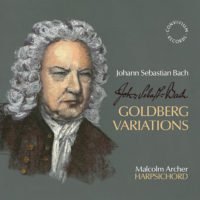 J.S. Bach’s ‘Aria with diverse variations’ was composed in 1742 and since has become extremely well known and loved, though according to Christoph Wolff there are no records of public performances until the late 19th century. Its title page described it as having been ‘Composed for Music Lovers, to Refresh their Spirits’. Supposedly, the piece was commissioned by Count Hermann Carl von Keyserling to prevent insomnia, and he was so pleased with it that he gave Bach a golden goblet with a hundred gold coins inside in place of traditional payment! This theory has subsequently been proved untrue, but it is fun to imagine nonetheless. The reason the piece became known as the Goldberg Variations is that one of Bach’s pupils, Johann Gottlieb Goldberg, was also the resident harpsichordist in Keyserling’s court, and it was he who would be summoned to play the variations whenever the Count wanted, often during his frequent sleepless nights.

The harpsichordist playing in this recording is Malcolm Archer, who has had an impressive career in church music. He was the Organist and Director of Music at Bristol, Wells and St Paul’s Cathedral, and then went on to be the Director of Chapel Music at Winchester College for eleven years. Malcolm studied as an RCO scholar at the Royal College of Music and was Organ Scholar at Jesus College Cambridge. He is a well sought after organist and harpsichordist, and has given solo concerts all over the world, including in the USA, Canada, New Zealand and Europe. Malcolm has performed with multiple orchestras, including Poulenc’s Organ Concerto and Saint-Saëns Organ Symphony, Brandenburg Concerto No.5 and the Bach keyboard concertos. He also performed with the London Symphony Orchestra in a classic rock concert in the Royal Albert Hall. He has a very broad concert repertoire and has recorded various works including J.S. Bach organ works and Messiaen’s La Nativité du Seigneuras. Malcolm’s website with more information can be found here.

Bach’s Golberg Variations are among the most common classical pieces to be recorded, with some 600 different recordings to date, so it is somewhat out of the ordinary for a brand new recording to be as exciting as Malcolm Archer’s is. This is partly due to the innovative and astonishingly high definition recording by Convivium Records, but also the grace, elegance, and decorum of Archer’s performance that held me transfixed throughout the entire 30 variations. I am listening to the digital download files in glorious high definition; the crisp, eerily lifelike listening experience only spoiled by the fact that my laptop now has significantly fewer gigabits of storage!

Although there have been many acclaimed recordings of the Goldberg Variations by renowned musicians such as Masaaki Suzuki and Celine Frisch in the past couple of decades, I am personally most familiar with Glenn Gould’s 1981 recording on which one can famously hear him gently singing along to the music, and so this is what I shall naturally be comparing Archer’s performance to, intentionally or not.

Beginning with the relaxed G major Aria where Bach introduces his opening theme secured by the sturdy bass line that underpins the 29 following variations, both Archer’s engaging interpretation and the gorgeous, warm resonance of his own Alan Gotto harpsichord in the acoustic of his converted church home studio work seamlessly together to draw your attention wholly onto the genius of Bach’s composition. Although it is difficult and hardly fair to compare a 1981 piano recording and a 2020 harpsichord recording, Archer takes the Aria a fraction faster than Gould, which I personally think lightens the music without losing any of the rhetorical and subtly provocative atmosphere. In fact, Gould has been criticised for the pulse of his interpretation of the Aria slowing down towards the end, which there is no evidence of in Archer’s recording. Many critics have argued that the theme is in fact a dance, and therefore should be taken at a faster pace than either Gould or Archer. An example is Celine Frisch’s 2001 harpsichord recording which received rave reviews by Gramophone magazine, particularly for her livelier approach to the aria, though I personally find it somewhat cluttered with extravagant ornamentation. Archer’s imaginative embellishments in the more energetic variations highlight the rich, complex Baroque texture and deflect any hint of mechanical ‘sewing machine’ style harpsichord playing, all the while never distracting or detracting from the canonic splendour that is Bach’s writing. Even dynamics, though hard to come by on a harpsichord, are conveyed by Archer drawing your attention to various aspects of the music, such as the clear obbligato bass lines supporting each canon, through clear, purposeful phrasing that never interrupt the rhythmic flow of the piece. Tastefully placed ritardandos save the listener from the clichéd and distractingly soppy phrase endings that so often accompany frequently recorded pieces where musicians try to force unfelt emotion into the music. Archer also makes effective and emotive use of the manuals on his harpsichord, helping to distinguish between the variations and highlighting how Bach designed each group of three variations as a showcase of the harpsichord’s two manuals, a free-style variation and a textbook two-voice canon.

Part of what makes the Goldberg Variations so fascinating is the sheer number of variations that Bach managed to write without ever repeating himself or boring the listener. Today the only thing that will bore the listener is having to choose which of the 600 recordings to listen to, but thankfully this recording, along with the appropriate listening equipment, will provide an unparalleled Goldberg experience. Archer’s performance, though recorded with the most contemporary equipment and technology possible, is technically flawless, charmingly original, and without a doubt would be well received by Count Hermann should he have heard it.