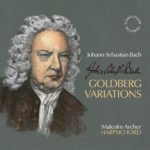 Seemingly on the heels of a plethora of recordings of Johann Sebastian Bach’s Goldberg Variations (BWV 988), comes yet another rendition by harpsichordist Malcolm Archer. In the well-written booklet notes we are treated to an easily understood analysis of the variations by David Owen Norris, all the more readable due to its brevity and focus on the music. Since this is an iconic work, one doesn’t need to go into depth about the various variations that become increasingly complex as the work progresses. So, here the review of necessity must concern the performance and the instrument upon which these movements is played. For the latter, Archer uses a harpsichord build by Alan Gotto of Norwich, England, a lively and quite resonant instrument copied after a 1728 German model by Christian Zell, whose own legacy reaches back into Bach’s household. The quality is excellent, with a bright and clear sound, and an easy touch that makes each note speak.

As for his interpretation of the Variations, one should preface any comment with a general one, where most of the recordings I have heard begin with an aria that is like the slow pouring of molasses. I suppose one finds this a good idea for interpretation, but then as each progresses, the tendency is to speed up until about Variation 28, with its twinkling trills, with a final rush in Variation 29 and a more folk-like tempo in the final Quodlibet. Of course, it ends usually with a da capo of the aria. Here, Archer seeks to find his own tempos for each variations, and given the ease with which the instrument sounds, this allows for each variation to be distinguishable. For example, the Variation 22 Alla breve is done with a regal and decisive tempo, while the Variation 15, the canon at the fifth, is deliberate and a bit mysterious. Variation 8 in the compound meter of a gigue is light and airy, in contrast again to many who seem to want to take it at a breakneck speed.

In short, Malcolm Archer has done some nice interpretive work on this iconic set. I find the disc interesting and well-performed. The tempos and registration seem to follow the contents of each variation, and the instrument is, as noted, nicely resonant. All this being said, I find it a solid, even quite interesting recording, but I would find it hard to go further to say that it is in the lead of a very full pack. If one wants a good, solid, and quite accessible recording of these variations, then you certainly should consider this one. If, however, one is looking (perhaps in vain) for a novel interpretation, this will remain just one of many similar ones. Your choice, save if you happen to collect Goldbergs, in which case this will be a fine addition to the collection.