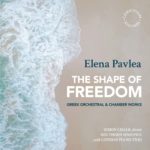 This new collection of chamber and orchestral music by Greek composer Elena Pavlea seeks to take the listener on a heartfelt journey through a myriad of styles, textures, and emotions, from the Baroque infused opening piece ‘Narrow Streets’, to the rather more oriental violin and piano focussed ‘The Offering’. Much like Odysseus on his ten year voyage home from Troy, Pavlea tells an epic tale through her music, of adventure, escape, elation, and most importantly, of her homeland.

Elena Pavlea grew up in Athens, Greece, where she discovered her love for music at an early age, and began composing aged eight, just a year after beginning piano lessons. Realising she wanted to pursue composing as a career, Pavlea began her formal music education at the Max Hallecker Conservatory, with further education at the Eratio Conservatory and The American College of Greece, as well as earning her postgraduate diploma at the Guildhall School of Music and Drama in London. Whilst her primary musical influences are Neo-romantic and Minimalist styles, Pavlea has composed for film, dance, and even in collaboration with poets, artists and sculptors, so it would be a discredit to the breadth of Pavlea’s compositional output to constrain it to just two genres.

The pieces on this particular CD are performed superbly by the Southern Sinfonia and London Piano Trio, conducted by Simon Chalk, with multiple other musicians bringing life to the solo roles. The quality of the recording is as top notch as we have come to expect from Convivium Records’ work with sound engineer Adaq Khan, and the Turner Simms concert hall recording venue also helps provide a remarkably immersive sound, which lends itself perfectly to these deeply atmospheric pieces. I’m listening to the CD on a Primare BD32 CD player (sadly now discontinued, replaced with the CD35), into a Primare SC15 Pre-amp, then into the vast Ming Da Dynasty Cadenza Grande valve amplifier, and out through a pair of Dali Oberon 7s. I have to say, this system produces a fantastic sound, with the Scandinavian speakers and amplifiers working together in harmony, and the Ming Da providing that unique valve amplifier warmth that complements this music so perfectly.

In the interests of keeping this article succinct, I shall comment further on just a few of my favourite pieces, which, as a classicist as well as a percussionist, unsurprisingly seem to mostly be either the pieces inspired by Greek myths or where the percussion section shines through!

Beginning with track 13, Euterpe: Giver of Delight, this is, as the name suggests, a delightful tribute to the ancient Greek Muse of Music, Euterpe, which opens with an evocative descending solo melody on the Viola. The pensive G minor key and lilting 3/4 time signature is established with the entry of the rest of the orchestra, and the main motif (a development of the opening Viola theme) rises above the persistent semi-quaver accompaniment. The joyful nature of the Muse to which this piece is dedicated is reinforced in a more energetic 6/8 section, with soaring melodies in the strings that, to me at least, reflect the other-worldly nature of the ancient Greek spirits. The percussive timbre of the marimba and xylophone is utilised here to double the semi-quaver accompaniment and provide rhythmic reinforcement, as well as adding to the dance-like nature of the second theme.

Another piece that stood out to me was track 4, Means of Escape, for its elegant simplicity, yet extraordinary detail and development that encapsulates everything I enjoy about minimalist music. The piece is once again in G minor, and features one main theme – a sympathetic and elegant dotted semi-quaver melody introduced by the Cor Anglais, and developed throughout the piece. The space around this solo introduction is yearning to be filled, so it is a beautiful moment when the rest of the woodwind joins in, and a steady triplet accompaniment on the marimba and piano drive the music towards its climax, creating an almost funky syncopation with the main theme. A rolled timpani pedal note and tremolo strings combine with the rhythmic intensity towards the middle of the piece to create an element of suspense that makes this piece even more cinematic. One can easily picture this piece accompanying beautiful arial footage of a remote area such as Dartmoor or the Scottish highlands.

Finally, track 8, Winged Victory of Samothrace. I had to listen to this piece multiple times, so entrancing were the melodies and harmonic progressions. Set in G# Minor and composed just last year, this dramatic piece honours the beauty and spiritual virtues of the ancient Greek goddess of victory, the Winged Nike. It is worth looking at a picture of the Hellenistic statue of Nike (shown below) while listening to appreciate how well this piece captures her etherial beauty and victorious spirit. The alluring piano opening is soon joined by a soaring flute melody, and later a new theme is presented by the strings, accompanied by colourful rising piano chords, unmistakably representing all the drama and emotions associated with victory, and reminding me a lot of Hans Zimmer’s harmonic traits, which I assure you is a compliment.

This CD is available from Convivium Records as of 14th January 2022, and is well worth a listen. It is an impressive showcase of Pavlea’s compositional skills and her motif writing in particular shines through – I hope to see her name on some film scores soon, which I think she will really excel at.