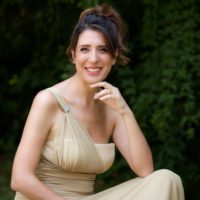 Born and raised in Athens, Greece, she discovered classical music at an early age, undertaking her first piano lessons aged seven and composing her first piano pieces aged eight. In her own words, she relates, “I quickly realized that composition was something I felt I needed to pursue. I feel that music can help me to express myself in an honest and sincere way.”

Much of Elena’s music has been written collaboratively with film directors, video artists, choreographers, sculptors, painters, and poets. In her own words: “Music can be found in words, in gestures, in images and objects and can create a whole world by itself – or enhance an existing visual narrative where it already exists”. Read more

Elena began her musical education in Greece. She undertook theory lessons with Alexandros Dionatos at the Max Hallecker Conservatory and completed her piano studies under professor Yannis Hallecker with a Piano Soloist Diploma. She also holds a diploma in Harmony (class of Dimitris Karavelis) from the Eratio Conservatory. She graduated with a Bachelor of Arts in Music from The American College of Greece, with a minor in Philosophy. Elena continued her studies in the UK receiving her Postgraduate Diploma in Piano Performance from City, University of London and Guildhall School of Music and Drama (joint programme) under professor Peter Bithell. Elena is currently pursuing further studies in Fugue and Orchestration under professor Yannis Avgerinos at the Athens Musical Society Conservatory.

Elena has been awarded numerous prizes, including two first prizes in 2015 and one in 2018 at the International Composition Competition ‘’Donne in Musica’’. Alongside composition and performance, Elena also studied philosophy and music aesthetics whilst she attended numerous masterclasses in Greece and abroad. She continues to work as a pianist, composer, piano teacher and music educator in conservatories and schools in primary and secondary music education.