How we made Hodie – by the students at PGS 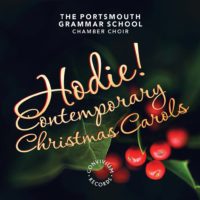 In January, we went to Jesus College Cambridge for 4 days to record a CD of contemporary Christmas Carols (entitled ‘Hodie!’) in the college chapel. After 7 months, we are looking forward to hearing the final recording.

The chamber choir is the Portsmouth Grammar School’s largest ensemble, encompassing musicians from across the senior school. It has a repertoire ranging from renaissance to 21st Century contemporary works. We have a strong partnership with Portsmouth Cathedral, performing with the Cathedral Choir at numerous events, for example the joint evensong and a recent BBC Radio 4 broadcast. The choir is also invited each year to sing evensong at Christ Church Oxford and, in November, we work alongside the London Mozart Players to give the world premiere of a new Remembrance work written specially for us. This year will be a 50-minute cantata by Jonathan Dove.

The recording was more challenging than we anticipated, as it is very different to performing live in a concert. We had to get used to the microphones and develop a high level of self-discipline, when adapting to the challenges of such a fantastic acoustic in the chapel, where any sound would picked up. We also had to have a level of concentration and stamina, especially after take 25 of a piece, where spirits weren’t so high.

The recording was an extremely rewarding process which helped us all to develop as musicians. The choir became closer and more unified , not just as an ensemble but as a group of people. As the weekend progressed, the efficiency of recording improved significantly, and the choir’s blend and tone improved hugely.

We’d like to thank Andrew King, the producer, and everyone else on the production team for helping us to create this fantastic CD, their professional insight was invaluable, giving us advice on things we wouldn’t necessarily be able to hear when singing. For many of us, it’s something we have to look back on to commemorate our time at PGS. The quality of what we’ve been able to produce to such a high standard is something that we are all incredibly proud of and we’d like to thank Mr. Gladstone for making all of this possible. 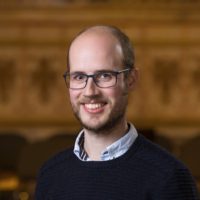 Formerly Organ Scholar at Peterborough Cathedral, Sam studied music at Cambridge University, graduating with a double rst and several college prizes. As Organ Scholar at Jesus College Cambridge he accompanied the Chapel choirs on tour, BBC broadcasts and CD recordings. He was also the founder-conductor of the Jesus College Chamber Orchestra and played for services with the King’s College Mixed Choir, King’s Voices.

Sam was, for five years, Deputy Master of Music at the Chapels Royal, Her Majesty’s Tower of London. He performed with and directed the professional choir at concerts, services, broadcasts and state occasions. During this time, he was Organist in Residence at Brafield College and studied for a PGCE at the Institute of Education (University of London), going on to teach music at Whitgift School in Croydon.

Prior to moving to Portsmouth in January 2012, Sam was Assistant Director of Music at Sevenoaks School. At Sevenoaks, he founded the Sevenoaks Chamber Choir, taking them on tour three times to France and Spain. As well as having responsibility for the Lower School Curriculum, he coached several Chamber Groups to the semi- nals and nals of the Pro Corda National Chamber Music Festival, and conducted the 200-strong combined choral society and parents’ choir alongside professional ensembles Fine Arts Brass and Voces8.

At thee Portsmouth Grammar School, alongside leading the vibrant and busy music programme at the school, Sam has been Music Director for The Producers and Mack and Mabel at the King’s Theatre, Southsea, and directed school ensembles in world premieres, collaborations with professional soloists, and concerts in venues throughout Portsmouth and further afield. 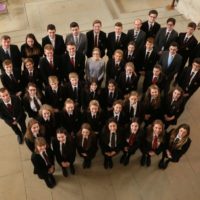