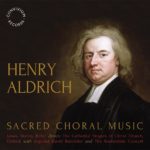 Review by Marjorie Johnston, The Journal of the Association of Anglican Musicians

For months now, this CD has found its way out of the “to consider” stack of discs on the shelf onto my desk, near my iPad, even into my purse. Henry Aldrich’s expectant, pale face on the cover kept me company during lockdown last year as if patiently waiting for me to listen, and I now appreciate his perseverance. A quick internet search brought up not only this disc, but also his presence on another recording featuring bawdy songs and that was enough to win me over; at last I was inspired me to find out just who this man was.

Henry Aldrich lived from 1648-1710, and wrote primarily for daily services at Oxford Cathedral, though his career was not solely that of a musician. In 1689 he was appointed Dean of Christ Church, Oxford, and added the position of Vice-Chancellor of Oxford University in 1692. As an architect, he designed what is now the library of Lincoln College and the beloved Peckwater Quadrangle at Christ Church (known to students there as “the Peck”). Dr. Cristina Neagu, Keeper of Special Collections at Christ Church Library, led the research team that brought this Henry Aldrich project to life with the goal of enhancing “…our understanding of the breadth of his intellectual legacy.” Dr. Dean Jobin-Bevans of Lakehead University in Canada provided all except one of the editions used, making scores for much of Aldrich’s music readily available for the first time in over 300 years. Dr. Jobin-Bevans’ brilliant programme notes for the disc are fascinating, imparting his love for the subject as well as valuable tidbits of information for the listener.

There is good variety on the disc – six full anthems, five verse anthems, instrumental occasional music, and a bit of service music. Obviously, there is plentiful counterpoint, but there are also more restful moments of homophonic sounds with good intonation from the choir. The producers succeeded in choosing scriptural texts “ranging in mood from penitential to celebratory” from the Book of Psalms or the Book of Common Prayer (1662).

A standout on the disc is The Lord is King, a seven-minute verse anthem featuring a glorious soprano soloist, Lucinda Cox. David Bannister devised an accompaniment that provides gentle support from the organ. It’s “a day in the life” for a keyboardist in this style, playing an integral role but never stepping into the spotlight. I also put an asterisk by the Magnificat and Nunc dimittis taken from Aldrich’s Morning, Communion & Evening Service in F Major. The setting is accessible yet provides more than a few intonation and rhythmic challenges, making it musically interesting throughout. Apparently, Aldrich was not concerned with notating meter changes or even measures, but relied primarily on text to provide syllabic stresses. Tenor and alto soloists alternate with the choir on the Magnificat, while the Nunc dimittis calls for mixed voices plus the unusual soloist combination of two sopranos and a bass. All five soloists recruited for this sound comfortable and well prepared. O God, thou art my God features a vibrant baritone soloist, Benjamin Durrant. Both he and the aforementioned Lucinda Cox prove that one doesn’t have to have a stickstraight tone production for stylistically accurate and beautiful Baroque singing. American choral singers (particularly male voices) seem to get away with a bit more vibrato, but these two excellent vocalists from an English choir persuasively make a case for adding light body to the sound.

Be not wroth is an Aldrich arrangement based on part of a William Byrd motet, and even though the middle section is pure-Byrd, the complete work is an entirely new piece. (Musicologist Robert Shay coined the term “recomposition” for the process of creating a new choral composition based on an existing model.) Aldrich’s skill at adapting to Renaissance compositional techniques is more than convincing, and few would know that the anthem is not completely Byrd’s.

The disc concludes with music Aldrich wrote for an annual summer event held at the Sheldonian Theatre beginning in 1672, “The Oxford Act”. Conveniunt doctiae sorores is a secular ode mixing a Greek theme with references to British royalty; the voice of Apollo is expertly sung by bass soloist, Thomas Lowen. The Cathedral Singers and The Restoration Consort (two violins and a viola da gamba with organ) complete the ensemble, and the disc concludes with the instrumentalists playing a Suite of charming occasional music that employs cheerful dance rhythms.

James Morley Potter is a choral conductor in high demand in Great Britain for good reason, and he is a respected writer and program annotator, as well. The 27-voiced Cathedral Singers of Christ Church is a separate entity from the better known Cathedral Choir. This ensemble of volunteers incorporates local talent from the area in addition to students and university staff; it’s not of professional quality but it is a fine ensemble. I frequently wonder how conductors of such groups manage with personnel changing from from year to year, and imagine the pressure of having the name “Christ Church” attached to everything!

As a musician, my late mother had only a few pet peeves and they were always supported by logic as much as personal taste. I enjoyed hearing her rant about people who proudly stated that they liked all music. “They don’t like all books, all movies, all paintings…how can they possibly like all music ?” she would ask. My suspicion is that those making such a claim would eat their words upon listening to Henry Aldrich’s sacred choral music and probably his bawdy songs, too. However, those of us who appreciate the reserved joy and exquisite precision of early Baroque style can’t comprehend those who don’t – it all makes such nice musical sense! Conductors and singers understand that there are some voices too huge to reign in, but there are also those in possession of large voices who learn to discipline themselves well enough to participate fully, and of course those singers become much more marketable. Henry Aldrich’s music sounds like it’s vocally rewarding, especially if one has a nice, reverberant acoustic in which to sing. This recording was made in the Merton College Chapel, though I could not find an explanation as to why.

I strongly urge my fellow AAM members to listen to this recording! It is a treasure trove of “new to us” sacred choral music, and the culmination of a long and worthwhile project co-sponsored by the Friends of the Christ Church Cathedral and Lakehead University, Canada.

Marjorie Johnston, The Journal of the Association of Anglican Musicians, April 2021

The Association of Anglican Musicians was founded in the early 1970s as the successor to the American Cathedral Organists and Choirmasters Association. AAM’s membership today embraces musicians, clergy, and supporters of music in Anglican liturgical life.

Members work and worship in cathedrals, parishes and missions large and small, theological seminaries, and church-related schools. They are organists, pianists, bishops, guitarists, presbyters and deacons, directors and trainers of choirs, teachers of music, and friends of Anglicanism’s musical tradition and practice of sung prayer.