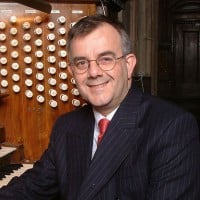 Malcolm Archer has been rightly called “one of the world’s leading church musicians” and his achievements are, quite frankly, staggering. As an organ recitalist he has played in nine European countries and the US while his CDs take in composers as diverse as Bach and Messiaen. As a composer he has written over two hundred published compositions. And as a choir director he has served at Norwich, Bristol and Wells Cathedrals while his time as Director Of Music at St Paul’s Cathedral saw his best-selling album of Christmas music at St Paul’s named Editor’s number one choice in the Daily Telegraph. In August 2007 he took up a new position as Director Of Chapel Music and organist at Winchester Cathedral where he is in charge of the Winchester College Chapel Choir as well as teaching the organ. That choir directed by Archer recently released ‘Mozart Requiem‘ on Convivium Records.

For the album producer Andrew King brought in some fine soloists – soprano Sarah Fox, alto Diana Moore, tenor John Mark Ainsley and bass Ashley Riches. They and the London Mozart Players (the UK’s first chamber orchestra formed back in 1949) do a great job on the Requiem which Cross Rhythms’ reviewer described as “one of the all-time greats of the sacred choral repertoire.” But it was the transcendently beautiful voices of the choir which most gripped the listener. As CR’s Steven Whitehead wrote, “. . . there is a plethora of recordings [of Mozart Requiem] available, all following a slightly different approach and many featuring world famous soloists and conductors. It seems almost unbelievable to suggest that what is basically a school choir with guest soloists can stand in such exalted company but under Malcolm Archer’s assured direction we get another worthy addition to the catalogue.” I asked Malcolm how this worthy addition came into being.

“Well initially what happened was, I met Adrian Green who runs Convivium Records and we’ve done a series of recordings with them now. The first one was actually a disc of my own music which we made seven or eight years ago and from then we did a disc of Stanford. Whilst Adrian and I were talking about future projects, we came up with the idea of a major work – I’d always wanted to record the Mozart Requiem. And it was probably the biggest project that the choir had ever done because it would involve hiring an orchestra and a soloist, so it was going to be a very expensive recording project but it was a work that Adrian very much wanted on his catalogue. So it worked for both of us really and it was a great project. It was fantastic for the boys to learn a work like that and to be able to record a work like that. But actually the soloists said that they found that recording something like the Mozart Requiem is an opportunity that doesn’t come around every day, so they were grateful to have that opportunity too.”

Teaching the choir such a complex work was no easy task. “We spent quite a number weeks learning the work, I mean it’s a big piece, it lasts for about 50 minutes. So for school boys obviously it’s a very big ask. So we learnt it bit by bit, but the way we did it was by including movements as anthems in our regular service, so we could learn it bit by bit. When the time came the boys were right on top of the piece and it was just the right time to record it. I should say also we were very lucky in having the London Mozart Players as our orchestra who really are a fabulous band and a great treat to work with and they also enjoyed the opportunity of recording that work.”

Malcolm has worked with lots of choirs down the years. How good would he say the Winchester College Chapel Choir are compared to the other choirs he’s worked with? “They are equally as good as any of the choirs I’ve worked with actually and one of the great privileges for me is to be able to work with young people and see young people achieve those fantastic standards. A lot of our older boys, our artisans and basses are all in the sixth form in our college and a good number of them will go on to choral scholarships at Oxford and Cambridge, in choirs like Kings College Cambridge, St Johns College Cambridge and so on.”

I suggested that recording such a much-loved work meant that the Winchester version was bound to be compared to previous recordings of the work. “I think that’s right. I think whenever you record a famous work you always do have that problem. The other side of that coin is that just lately a lot of the recordings that have been made of the Mozart have been modern completions because, of course, Mozart didn’t finish the work. He got as far as the lacrimosaI I think, about eight or nine bars in, and that was the point where he died. So, various different people have completed the work. We decided to go back to the original Sussmayr completion, because Sussmayr had been a pupil of Mozart and knew him very well.

“Part of the whole story of the Requiem was that it was commissioned by a count who wanted to pass it off as his own work and this was a great strain on Mozart and I think probably caused his illness and death in the end. But one of the great advantages of Sussmayr was that his handwriting was very, very close to Mozart’s. It meant that Constanze, Mozart’s wife, could actually deliver the manuscript in the end and as it were got away with it and got the money that she needed because I think that they were very poor at the time of Mozart’s death. There was a very good reason for going back and recording that version of the work because I think that there is nobody really, other than Sussmayr, who could have had any idea what Mozart could have intended and probably got as close as anybody to that, I think.”

I finished our fascinating chat by suggesting that unlike many forms of “Christian music”, choral music is appreciated by a large audience outside of regular church goers. “I think that you are absolutely right. I think there is something about choral music which puts people in touch with their spirituality. There are so many things about modern life that are so sort of matter of fact and rather unspiritual in a way that I think people long for that element of spirituality back in their lives. I think that is one reason why so many people now go to churches and cathedrals at Christmas time. You get record numbers going to cathedrals and carol services and so on. I think that it is that sense of mystery that people feel is missing in their lives and choral music and good quality worship can bring that back for them.

Inherent beauty can be appreciated either in a religious way or a non-religious way. I think that there are people who go and let the music wash over them. If you like just go and have 45 minutes of peace and solitude at the end of the working day and that may then lead them to something a little bit more like a religious experience. I think that’s the beauty of a service like that, that you don’t actually have to participate in the sort of conventional sense, you can participate quietly and silently and let the worship take you where you let it take you, where you want it to take you. I think that a lot of people have been brought into the church just in that way, through the beauty of music and worship and that’s why I think that it has a very valuable place.” CR

The opinions expressed in this article are not necessarily those held by Cross Rhythms. Any expressed views were accurate at the time of publishing but may or may not reflect the views of the individuals concerned at a later date.

Cross Rhythms was started by Chris and Kerry Cole over 30 years ago. They saw that a media voice for the Christian faith was vital to get the Christian response to society’s ills back into the marketplace of everyday lives.

The radio began in 1983 with a half-hour programme on Plymouth Sound, an ILR station in Devon. The magazine was first published in April 1990, the first festival was held in 1991, the website was initially launched in 1995, the first Community Radio licence was awarded in 2002, the Media Training Centre was launched in 2012 and a Cross Rhythms supported online radio station in Bethlehem was launched in 2015.

Through all these mediums, Cross Rhythms is typified by using contemporary Christian music that can culturally engage with people who are outside the churches in today’s society. Cross Rhythms has also looked to communicate the Christian faith in a language that is accessible to contemporary culture but doesn’t water down it’s truths.