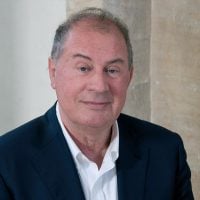 Acclaimed musician speaks about the making of the album

I have been involved with music in cathedrals for most of my singing life. This recording, whilst not exclusively devoted to cathedral music, does contain quite a few sacred items which have meant a great deal to me over the years; I wanted to record them before it was too late.

The project was suggested to me by Malcolm Archer, who has worked extensively for some years with Convivium Records and who knows the acoustic of Portsmouth Cathedral well. Initially I had my doubts about recording there, because it was not a building I knew at all: I imagined it would be rather noisy, being so close to the Royal Navy depot and to the docks. In fact, it turned out to be the ideal venue with a lovely warm acoustic that seemed to suit my voice and allow it to bloom. We had the luxury of unrestricted access to the building in the evenings, after it was closed to the public. Some of the sessions went on until well after midnight and I recall recording the Britten folksong The trees they grow so high at around 1 am. Recording at that late hour is quite a surreal experience, so detached is it from reality.

I was also very fortunate in the recording team, which consisted of the wonderful sound engineer Adaq Khan, and the incredibly painstaking Andrew King as producer. Nothing seemed to get past Andrew’s razor-sharp ears: every tiny slipup of intonation and pronunciation was seized upon! I have been recording for close on 45 years, and he is the most critical but equally charming producer I have ever encountered. The project was overseen by Adrian Green, who runs Convivium Records from a small office adjacent to the cathedral; he is also a singer himself in the cathedral choir, so his input was invaluable.

Malcolm Archer is, of course, an old friend, which made our collaboration a real pleasure. We first met some years ago before he went to Wells Cathedral, and we kept in touch not least because of my regular visits to Wells to give singing lessons to his choral scholars. I saw little of him when he was so busy at St Paul’s, but we did give a concert together at Stogursey in Somerset, which is his holiday retreat, and it was there that he suggested that he write some songs for me. These came to fruition in a later concert in the lovely church, accompanied by organ, and then at Winchester College with piano accompaniment. When Malcolm proposed this recording it seemed obvious to include these three songs. (The complete work is a cycle of nine carols designed to be sung either liturgically or in concert, accompanied by either piano or orchestra.)

But what to put with them? After all, I had already recorded most of the Baroque repertoire and I didn’t want this to be just another recital of Purcell and Handel etc etc. Going through my music library (a euphemistic term for the chaotic piles of music in my study), I alighted upon several unusual pieces that I had put aside over the years, thinking how much I liked them but also that they would never fit into a conventional programme. The time seemed appropriate to include them in a programme that needed neither rhyme nor reason. That’s the great joy of working with a small independent company; for too long the big labels have, solely on commercial grounds, been very dictatorial. I remember that in 1976 I wanted to record the hitherto little-known Vivaldi Stabat mater and asked one of the large companies to do this. I was grudgingly given permission and paid a derisory fee, because ‘it will never sell’.

That recording subsequently sold over 300,000 copies in France alone, and it is still selling now, well over 30 years later.

I certainly don’t anticipate such sales figures for Thus angels sung, but the content is much closer to my heart. As an ex- cathedral chorister, how could I overlook Tallis and Byrd, here represented by two small gems? O nata lux is a staple item from the repertory, and I must have sung it hundreds of times as a treble, but is nice to treat it on this occasion as a simple solo song. I’m sure Vaughan Williams would have written for countertenor had he lived longer. After all, he loved anything Elizabethan, and the Tallis tune that he immortalised in his Fantasia would have been sung by an all-male choir. It is also wonderful to be able to include old friends by Stanford, Quilter, Attwood and Elgar, plus some lovely Britten and a little grace to be sung before dinner written by my friend Christopher Moore. This and the songs by Malcolm are the only pieces specifically written for countertenor — all the others have been transposed and rearranged to suit my voice. I had enormous pleasure in choosing and recording all the pieces on this CD, and to give equal pleasure to any who listen to it would be very rewarding.

The Friends of Cathedral Music (FCM) is a charity which seeks to maintain and expand the work of choral foundations of cathedrals, collegiate churches, chapels, and other appropriate places of worship in the United Kingdom and Ireland. founded in 1956 by the Revd. Ronald Sibthorpe.

It is sent out twice a year to all members of the The Friends of Cathedral Music.