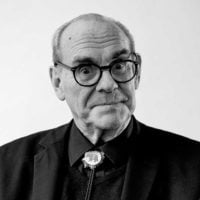 Born in Berlin in 1936, John White studied piano with Arthur Alexander and Eric Harrison, and composition with Bernard Stevens at the Royal College of Music.

Since that time, he has been continually active as a composer, performer and teacher. His career includes composing and directing music for the theatre, ballet, experimental music and in electronic ensembles.

In the 1960s and 70s, he was closely associated with English experimental composers. During that time, he invented the British form of minimalism known as ‘systems music.’

John has played bass trombone with the Royal Ballet Touring Orchestra and tuba in the London Gabrieli Brass Ensemble. In addition, John has toured widely as a piano recitalist specialising in late Romantic music, in particular Erik Satie.

In theatre music, he has composed scores for the Royal Shakespeare Company. Productions include The Merry Wives of Windsor and Les Enfants du Paradis.  He has also composed many products for the Royal National Theatre and various regional theatres. Lastly, he has provided musical direction of the Western Theatre Ballet and numerous musicals in London’s West End.

John White has held a succession of teaching posts. These include the Royal College of Music, Royal Academy of Music, Yehudi Menuhin School, the Royal Academy of Dramatic Art. Also, Leicester Polytechnic (now De Montfort University) and the Drama Centre, London. He has fulfilled visiting lectureships in various foreign institutions and conducting workshops with CoMA (Contemporary music-making for amateurs). As a result, CoMa commissioned two works for large ensemble.

Felix Blumenfeld: Episodes in the life of a dancer – “A sheer joy to behold” (International Record Review)

Felix Blumenfeld: Episodes in the life of a dancer – “Powell makes a persuasive case for his music’s occasional revival” ★★★★ (BBC Music Magazine)

Episodes in the Life of a Dancer released by Convivium Records

John White: Adventures at the keyboard – “This ear-opening set ought to be a mandatory purchase” (International Record Review)