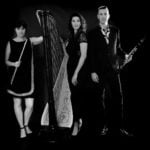 Comprising the beautiful and unusual combination of Flute, Clarinet and Harp, the Korros Ensemble has been performing together since its formation in 2001 during the musicians’ studies at the Royal Academy of Music. With a strong vision of introducing something new and original to the chamber music world, Korros continues to cleverly rework its favourite repertoire – creating an exciting and fresh way of listening to beloved orchestral, chamber and solo works. The group performs with dynamism and flair, and the sound world they produce is lush and mesmerising.

No matching posts were found.