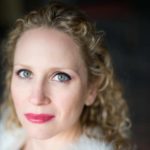 Luci Briginshaw was Winner of the 2021 Fulham Opera Robert Presley Memorial Verdi Prize, also winning the Audience Prize. In 2019 she won Audience Prize and Second Prize at the inaugural Opera: By Voice Alone competition. For English Touring Opera, Luci has sung The Queen of Shemakha in Rimsky-Korsakov’s The Golden Cockerel, Fennimore in Weill’s Der Silbersee, title role in Gilbert and Sullivan’s Patience and covered Konstanze in Mozart’s The Seraglio and Mimi in Puccini’s La Bohème. Luci has also covered The Queen of the Night in The Magic Flute for Glyndebourne and sung live on In Tune for BBC Radio 3. Other roles include Aithra (Die Ægyptische Helena), Violetta (La Traviata), Adele (Die Fledermaus), Gilda (Rigoletto), Lucia (The Rape of Lucretia), Leila (Les pêcheurs de perle) and Donna Anna (Don Giovanni). She has also created several opera roles in contemporary works by Martyn Harry, Alex Groves and Mario Ferraro. Luci has lived and worked in London since completing her degree in Music at King’s College, where she was a first-study pianist as well as singer.