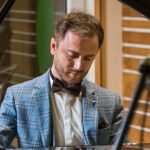 He has played in many cities with Santino Spinelli, including Jurmala, Cagliari, Roma, Milano, Bologna and Paris. He has also performed before the Pope in the Vatican State.

No matching posts were found.