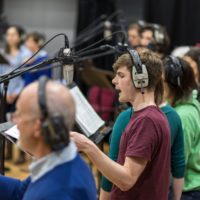 High-quality singing, innovative programmes and communicative performances are the hallmarks of Nonsuch Singers. The choir has gained a reputation for stylistic versatility in a cappella and accompanied works ranging from the Renaissance to the present day. Concerts have featured a great many works by living British composers.

Founded in 1977, Nonsuch Singers owes its name to the location of its first—informal— rehearsal, held on the site of Nonsuch Palace. The choir of some 40 members typically gives six or seven concerts a year, regularly performing with some of the UK’s leading instrumental ensembles and nest young vocal soloists.

Highlights have included Monteverdi’s Vesperswith His Majestys Sagbutts and Cornetts at St Martin-in-the-Fields (recommended as ‘Critic’s Choice’ in the Times); a critically acclaimed concert of French Baroque works, edited by Lionel Sawkins, with an orchestra led by Catherine Mackintosh and soloists including Andrew Kennedy and Emma Kirkby; and the first complete modern performance of Joseph-Nicolas-Pancrace Royer’s opera, Zaïde, Reine de Grenade, celebrating the 300th anniversary of the composer’s birth. In 2017, the choir celebrated its 40th anniversary with a performance of Bach’s St Matthew Passion in Southwark Cathedral.

Nonsuch Singers has given a number of world premieres, including John Tavener’s Exhortation and Kohima in the Royal British Legion Festival of Remembrance at the Royal Albert Hall (televised) and Wild Ways, Roxanna Panufnik’s setting of Zen poems for double choir and shakuhachi (a Japanese flute). In October 2014, the choir was privileged to give the first UK performance of To the Field of Stars by Gabriel Jackson, and in 2016 released its first commercial recording, with Convivium Records, featuring To the Field of Stars alongside other pieces on the theme of stars and the heavens.

Will Todd: Mass in Blue – “Nonsuch Singers get into the groove very convincingly” ★★★★ (Choir & Organ)