Benjamin Britten: A Ceremony Of Carols

The album features music for upper voices and harp by 20th century composers Benjamin Britten and Gustav Holst. A collaboration in 2017 between Winchester College Chapel Choir and British harpist Katie Salomon, the recording captures the trebles (boys) at their best under the masterful direction of Malcolm Archer. Alongside A Ceremony of Carols and excerpts from Choral Hymns from the Rig Veda (sung in English) is a performance of Britten’s Suite for Harp by Katie Salomon.

Benjamin Britten’s A Ceremony of Carols Op.28 was composed in 1942 on board a Swedish cargo vessel – the Axel Johnson, as Britten and Pears returned to England after three very successful years in the United States. The journey took almost a month and must have been very tedious since conditions on board were hardly luxurious.

The work has eleven movements, one of which is for solo harp, and uses words from the English Galaxy of Shorter Poems. Several of the texts date from the 15th and 16th centuries and are in middle English, whilst others are by great poets such at Southwell and Cornish. Around the same time, Britten had made a start on Hymn to St.Cecilia and a piece for Benny Goodman, but customs officials confiscated the manuscripts thinking they might contain some sort of secret code. Fortunately for us, Britten managed to finish Hymn to St. Cecilia later. Read more

A Ceremony of Carols is scored for three part upper voices and harp and uses a plainsong setting of Hodie Christus natus est to open and close the work. The Procession and Recession are intended to be used as the singers enter and depart. The work is beautifully written for both the voices and the harp, and Britten chooses poems which tell a story about the birth of Christ. After the opening plainsong, we hear Wolcum Yole! an energetic movement with striking chords from the harp.

This is followed by a more reflective There is no Rose and then a solo boy sings a plaintive setting of That yongë child with a sparse but effective accompaniment. Then comes Balulalow with a rocking harp accompaniment and a treble soloist at the start. As dew in Aprille (I Sing of a Maiden) has a rousing opening, and then effective overlapping counterpoint between the voices over an animated harp part. This little Babe is a setting of great energy where Christ comes to ‘rifle Satan’s fold’ and ‘all hell doth at his presence quake’.

The harp Interlude that follows is cleverly based upon the opening plainsong and imaginatively developed into a very atmospheric movement. In Freezing Winter Night follows with harp trills and a shivering feel to the music, and haunting treble solos at the end. Spring Carol is a delightful call and response duet between two boy soloists, with the second treble responding with ‘the deer in the dale, the sheep in the vale, the corn springing.’ The final carol is Deo Graciasusing the words ‘Adam lay ibounden’, and is an exciting setting culminating in rousing harp glissandi’. The boys then leave to the Recession, a repeat of the opening plainsong.

Britten’s Suite for Harp is one of the landmarks in the harp literature. It was composed in 1969 for the leading British harpist Osian Ellis, and performed in the Aldeburgh Festival in the same year. It uses a variety of harp techniques and is written in five contrasting movements, including a majestic opening Overture, a very fast Toccata, a calm and illusive Nocturne, a Fugue and a Hymn which is a wonderful set of variations on the hymn tune St. Denio (Immortal, invisible). Britten’s ingenious use of colour is present throughout the work, which was an immediate success at its first performance.

Choral Hymns from the Rig Veda

In the years from 1900 to 1912, Holst developed a keen interest in the early religious literature and poetry of India, and even learned the basics of the Sanskrit language at University College, London. He then made his own translations of a number of Sanskrit poems and decided to set them to music. The Rig Veda is a set of more than 1000 ancient Indian hymns of praise dating from about 1000 BC.

Holst set to music four groups of these hymns entitled Choral Hymns from the Rig Veda. The Third group is scored for upper voices and harp (or piano) and was composed in 1910 for Frank Duckworth and his Ladies’ Choir in Blackburn, Lancashire, and first performed on 16 March 1911.

The four movements are Hymn to the Dawn, with a backing of rippling arpeggios, Hymn to the Waters, with its animated rhythm and unusual 21/8 time signature. Then cones the gentle and atmospheric Hymn to Vena which describes the sun appearing through the mist, and the elaborate Hymn of the Travellers, with a distinctly Eastern sonority and evoking a God who is the guide of travellers along the roads of this world and that leading to the next. 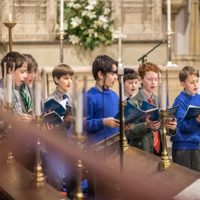 The Quiristers, who form the top line of the choir, perform a wide variety of music at home and abroad. They benefit from bursaries, a first rate all-round education, and a particularly broad musical training. This builds confidence, teamwork and a commitment to the highest standards. The Quiristers also sing on their own as a concert choir, as well as with Winchester College Chapel Choir. The senior boys from the College, many with previous experience as both choristers and Quiristers, provide the lower voices. Read more

Since 1966 the Quiristers have attended The Pilgrims’ School. They are given bursaries which are funded by Winchester College, and means tested top up funding is available up to 100 per cent. At Pilgrims’ the Quiristers benefit from the best academic teaching and join in all the school’s sporting activities.

Winchester College Chapel Choir broadcasts, records and goes on tour, and in recent years they have sung in the USA, Italy, France, Holland, Russia and Germany. In the Quiristers’ own concerts they perform a fascinating mix of both sacred and secular repertoire. The Chapel Choir regularly sings in London, where performances have included the BBC Promenade Concerts and The London Handel Festival. They have also performed Bach’s St John Passion with the Academy of Ancient Music. They recently sang for a special 70th birthday concert for the composer John Rutter.

The frequently appear on BBC TV and Radio. Appearances have included the BBC Radio 3 ‘Choral Evensong’ programme and Classic FM. In 2015 a Quirister won the coveted BBC Young Chorister of the Year competition, and it is noteworthy that his was the fourth such success in recent years.

The Chapel Choir has regularly broadcast the Classic FM carol service and the Quiristers have recorded Britten’s A Ceremony of Carols for BBC Radio 4.

The Chapel Choir is proud of its association with Convivium Records. Their releases have included Stanford’s Choral Music and Britten’s A Ceremony of Carols. The also recorded Mozart’s Requiem with the London Mozart Players. The choir has also recorded a disc of plainsong for Warner Classics in association with film and TV composer David Perry.

For boys with musical gifts, our musical training offers a unique opportunity. All our boys learn two instruments, with practice timetabled and supervised. As a result, many win scholarships (academic and musical) to a range of secondary schools, including Winchester College. Many former Quiristers and Chapel Choir members have gone on to take up Oxbridge choral and organ scholarships and won places at our top musical conservatoires. 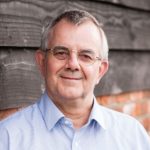 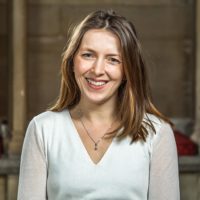 Katie Salomon is a professional harpist and teacher based in South-West England.

She first performed Britten’s Ceremony of Carols in Salisbury Cathedral with the cathedral choir whilst herself a young girl chorister, and first recorded it to great acclaim in 2002.

She feels particularly close to Britten’s Suite for Harp, loving it as a showpiece for the instrument, having studied as a post graduate with Sioned Williams who in turn studied with Ossian Ellis, the harpist for whom Britten wrote this Suite.

Her recordings with choir include performances of Bernstein’s Chichester Psalms and Janacek’s Otce nas, both works which feature the harp as a principal accompaniment instrument. She has recorded with record labels including Deutsche Grammophon, Universal, Decca and Demon.

Katie is much in demand as a harpist.  She enjoys all styles of playing from classical through to contemporary encompassing orchestral, chamber and solo performance.

She has a reputation as a gifted accompanist to choirs in these more intimate pieces, as a soloist – as shown in her interpretation of the Suite – and a crossover artist invited to play at venues as diverse as Buckingham Palace, London Guildhall and Wembley Pavilion Arena with other highlights being solo stage performances for the Wimbledon Champions’ Award Ceremony, the Rugby World Cup and Royal Ascot.