This debut album by tenor Adrian Green, explores well-known and lesser-known English Songs and includes a number of new commissions. Recorded in 2012, it was a collaboration with pianist, Noel Skinner.

In 1888, Parry described the condition of English song writing as a ‘Slough of Musical Despond such as can rarely have been provided by any nation under heaven.’ There certainly must have been recognition by leading British composers of the late Victorian era that where Germany and France both had established song composers, England had yet to follow suit. It is also important to note that there was an increasing demand for songs in England at this time. From 1851-1901, the population of England doubled and with pianos becoming increasingly affordable, there was a demand for repertoire, from amateur and more advanced musicians, who wished to entertain with poetry and song.

So it was that from around the 1880’s the English Art Song was born. Amongst the earliest to lay the groundwork other than Parry were Stanford, Elgar and Delius. For inspiration, they looked not only at the music of their foreign counterparts, but also at the universally popular themes of youth, love and loss in changing times. And times were uncertain through the Twentieth Century. Both the ideals and realities of these great themes play out in this selection of songs. Read more

Is she not passing fair?

Is she not passing fair? was completed in 1886, making it the earliest in this selection of songs. At times Elgar’s keyboard writing can sound as though it was conceived for orchestral forces rather than piano. The opening questions posed by the narrator are beautifully balanced with passages of softer singing, which develop into a grand declaration of love, full of confidence and clarity.

Ireland’s setting of The East Riding propels us with the winds that carry the fortunes of travellers over land and sea. The broad chordal piano accompaniment supports a rising and falling melody creating a similar feeling of expansiveness to that found in his better-known setting of Sea Fever.

In his first of a set of Six Sea Songs, Head’s A Sea Burthen perhaps harkens back a few years from 1949 to the Second World War. The courageous cry of ‘East away, O! West away’ by the sailors leaving home takes on a haunting quality as they slip away through the final bars of the song.

The Sea-Bird is the first of all Quilter’s published songs. Performed at Crystal Palace in 1900 to open his set of Songs of the Sea, the imagery of a bird flying away into the unknown emphasises a sense of solitude in travel, but also the potential of the ‘unknown’, alluded to by the concluding major chords in the piano accompaniment.

A Kingdom by the sea

Edgar Allen Poe’s last complete poem, Annabel Lee, provided Somervell with the text for a song more akin to fairytale and fiction than a factual event. The narrator’s love for the girl in a kingdom across the sea weathers even the envy of angels and the loss felt at her death.

Orpheus with his lute

Orpheus with his lute takes its inspiration from Greek mythology and the tale of a musician so refined in his art that even nature obeyed his will. The delicate handling of voice and accompaniment gives a sense of the gentle harmonic power behind the melody. Vaughan Williams uses a gentle strumming effect in the piano accompaniment to evoke the sound of a lute.

The bayly berith the bell away

Some have concluded that The bayly berith the bell away relates to a young woman’s dilemma. Should she devote herself to God or man? Perhaps the lily and rose represent the choice between religious purity and love. In light of this her repetition of ‘the rose I lay’ hints at her choice. Particularly moving in Warlock’s setting is the glorious change of key in voice and piano that reflects the sun suddenly shining through the glass window of the church.

The Salley Gardens stands as one of Britten’s most performed folk-song settings. It has been speculated that the gardens were a place where residents of Ballysdare cultivated trees for thatching materials. The melody of the song is simply presented and Britten is careful not to over-complicate the piano accompaniment to the voice, allowing the words to be heard clearly.

Coates’s setting of The green hills o’ Somerset must have been influenced in some part by those he knew who never returned to their country from the First World War. Whilst returning to Somerset and hearing the blackbird’s song, the narrator realises that, now alone, the countryside is of no comfort to them as it serves as a painful reminder of the ensuing loss of life and love through war.

Published in 1922, Quilter’s setting of Go, lovely rose, highlights the temporary nature of love, through the singer’s conversation with a flower. Quilter allows the melody to flow naturally to fit the words as required in each verse, making a bold and impassioned case against hesitation in love.

Silent Noon is a masterly sonnet in which the narrator reflects on such a moment of ‘visible silence, still as the hourglass’. But time moves on and the stillness is slowly brought back into focus by the returning musical theme employed by Vaughan Williams at the outset of the song, as the narrator seeks to capture that moment of true love.

One of a set of poems by Hardy that make up A Young Man’s Exhortation, Finzi’s The Sigh explores the narrator’s curiosity. From the introduction there is a sense of uncertainty in piano and voice, which pervades much of the song. As time passes, the transition to November leads the narrator to an increasing sense of regret that the sigh was never fully understood.

Composed in December 1913, Sleep is amongst the most haunting of Gurney’s songs. He had suffered from mood swings through his teenage years, and following his departure from the army in 1919 he was admitted to an asylum in 1922. Against a repetitive figuration in the piano, the melody ebbs and flows eventually reaching a climactic plea in the final phrases of the song before the harmony finally comes to rest.

ustralian-born, Grainger played a prominent role in the revival of interest in British folk music and so is included here as an honorary English composer. His setting of Early one morning was completed in New York and dedicated to Edvard Grieg. The two verses set by Grainger use the simple major key melody framed by a piano introduction and postlude (with voice) which convey a sense of mourning much more harmonically complex and worthy of the historical turmoil presented by the outbreak of war in Europe in 1939.

Butterworth’s life was cut short when he was killed at the Battle of the Somme in 1916. His setting of Bredon Hill has a sense of joy, passion, drama and tragedy, which bring to life the story of a life lost.

Will Drakett’s setting of In Dreams is the first of the final three tracks on the recording, which were always envisaged as an epilogue of sorts. The text by Robert Louis Stevenson is from a set of poems entitled Songs of Travel. Here the narrator sees the choice he must make between settling with love and returning to the world’s highway side.

Malcolm Archer’s setting of Youth and Love continues the story of the narrator in Stevenson’s poetry. Overcome by the pleasures that assail him, the narrator gives into his fate and moves on, leaving love at the garden gate to return once more to a life of apparent freedom for which he yearns.

When I am dead, my dearest

The final setting in this recording is to words by Christina Rossetti. Stevenson’s poems have highlighted the journey and discovery of youth and love, which eventually curbed by responsibility, are tried by the reality of a harsh world. When I am dead, my dearest seeks to console rather than lament the perhaps inevitable loss of love. 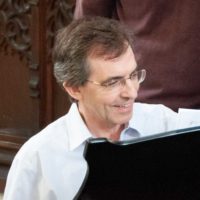 Noel Skinner won a scholarship to the Royal Academy of Music and studied with Leslie England and the accompanist Rex Stephens. As a student, he won many prizes including the Harold Samuel Bach Prize and the McFarren Prize (at that time the highest award for Piano). He has appeared at the Wigmore Hall, Purcell Room, Queen Elizabeth Hall, St John’s Smith Square and in several recitals at the Concertgebouw in Amsterdam, both as a soloist and in chamber ensembles. Noel has wide experience as an accompanist, operatic repetiteur and teacher. 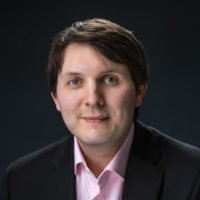 Adrian Green is a graduate of Royal Holloway, University of London and recipient of the Dame Felicity Lott Bursary. He is the Managing Director of Convivium Records and Convivium Singers. Convivium Records have worked for a number of high profile clients. These including The Baltic Exchange in London and The Royal School of Church Music.

Meanwhile, Convivium Singers have worked with many notable composers and conductors, and performed at a number of international choral festivals. BBC Radio 3’s ‘CD Review’ featured their recording of Jonathan Dove’s choral music (available on NAXOS). Consequently, the host recommended them as ‘an extraordinarily good choir to listen to’,

As a Lay Clerk at Portsmouth Cathedral, Adrian has been administrator for its “Sing Up” government grant since September 2008. As a result, he now runs their on-going Chorister Outreach Programme. In conjunction with this, he works as a vocal coach at Portsmouth Grammar School.

Adrian has sung with various amateur and professional choirs, including Royal Holloway Chapel Choir (with a choral scholarship). As a result, he has been introduced to a wide range of repertoire. These range from from early and liturgical music to contemporary composers worldwide. He has sung on recordings released by Hyperion, Signum, NAXOS, Convivium Records and other private labels.

Adrian’s experience as a soloist and musician have enabled him to work and sing in many European countries. Further afield, he has performed in America, Australia and New Zealand. He is in increasing demand as a soloist. As a result, he has had many recent choir and orchestra performances. These have included music by Monteverdi, Handel, Purcell, Mozart, Haydn, Vaughan Williams and Carl Orff.

Adrian has a particular interest in ‘English Song’. He recently completed a commercial recording of music (1900-1949) with Noel Skinner (Released in June 2013). Recent singing teachers and vocal coaches have included Margaret Lobo and Andrew King.