A collection of six works by James Erber, performed by Matteo Cesari.

James Erber’s music has been concerned with traces – signs of overwriting, both revealing and concealing what lies beneath – for even longer than the fifteen years spanned by the composition of the main work on this disc. An excavation of his interest both in archaeology as a metaphor for music and in archaeologies of music itself might begin ten years earlier still: with the thirty-year-old Erber, newly arrived in Freiburg, embarking on the composition of Music for 25 Solo Strings (Epitomaria–Glosaria–Commentaria). Read more

That work was, first of all, a “reading-through” of Byrd’s motet Emendemus in melius, making explicit both Erber’s interest in music of the Renaissance and early Baroque and his concern with spiritual and artistic continuity. But its tripartite scheme of source and multiply layered commentary was confirmed by a visit the composer paid while working on the piece to the site of the Roman town of Herculaneum, where he saw the ancient ruin set alongside the present-day settlement of Ercolano, itself consisting of the old town on the cliff and the modern buildings behind it, all three layers visible to varying degrees from a single vantage-point.

An Introduction to James Erber

James Erber’s music has been concerned with traces—signs of overwriting, both revealing and concealing what lies beneath—for even longer than the fifteen years spanned by the composition of the main work on this disc. An excavation of his interest both in archaeology as a metaphor for music and in archaeologies of music itself might begin ten years earlier still: with the thirty-year-old Erber, newly arrived in Freiburg, embarking on the composition of <em>Music for 25 Solo Strings (Epitomaria–Glosaria–Commentaria)</em>. That work was, first of all, a “reading- through” of Byrd’s motet <em>Emendemus in melius</em>, making explicit both Erber’s interest in music of the Renaissance and early Baroque and his concern with spiritual and artistic continuity.

But its tripartite scheme of source and multiply layered commentary was confirmed by a visit the composer paid while working on the piece to the site of the Roman town of Herculaneum, where he saw the ancient ruin set alongside the present-day settlement of Ercolano, itself consisting of the old town on the cliff and the modern buildings behind it, all three layers visible to varying degrees from a single vantage-point.Read more

Although the audible presence of an earlier composer’s work, “composed into” the texture as the Byrd is here, is unusual for Ember,(Footnote 1) almost all of his music uses rhythmic processes of proliferation and contraction which are ultimately derived from a study of variation technique in early 17th-century music. These processes can be applied both to the formants with which he extends his basic material across the span of a large piece, as in <em>Music for 25 Solo Strings</em>, or to the “grids”—themselves patterns of rhythms, bar lengths etc.—which in the decade that followed increasingly came to constitute his basic material, so that an entire piece often consists of a pre-composed structure which is obscured by and perhaps occasionally glimpsed through multiple layers of decoration and permutation: although it is the layerings themselves, of course, which in the process become the music’s most characteristic voice.

This layering is not always achieved through the use of such a large complement of players as in <em>Music for 25 Solo Strings</em> – in fact, all the other early works are for five players of fewer, one of the several reasons for which one hopes that the present recording will attract enterprising chamber groups ton this music’s distinctive personality and fragile optimism of spirit.(Footnote 2) Still, by the middle of the decade, Erber had decided to experiment with clarifying the surfaces of his music, and turned for the first time to the idea of a work for solo instrument, the idea being to treat it as a melody instrument and not as the reservoir of parametric possibilities with which composers such as Barrett, Ferneyhough and Hübler (composers with whom Erber otherwise had much in common) were at this time choosing to work even in music for one player. <strong><em>Flourish</em> </strong>is at one level a straightforward portrait in sound of its epigraph from Sterne’s <em>Tristram Shandy</em>, its single melodic line subdivided into a series of downward curves like an abstracted representation of the path traced in the air by the corporal’s stick. But the line is further punctuated (or interrupted?) by a succession of long, <em>senza vibrato</em> notes in the instrument’s lowest register (using quarter-tones, whereas the upper-register line is mainly confined to semitones) – a layer of implied counterpoint which briefly turns to real polyphony in the final long, low D natural, the flautist’s voice joining in to hold the pitch as the instrument bends the note into an ending which not only takes the work back from the pitch from which it began but also unites the work’s two primary gestures, flourish and substantiated note.

Both more disparate and more consciously virtuosic than its predecessor, Traces B nonetheless shares the earlier work’s sense of semantic overload, of a richness and multilay-eredness so extreme as to constantly threaten the work’s cohesion. The use of extended playing techniques defines much of the piece, as do constant changes of texture and behaviour. Towards the end, a bravura section featuring high <em>staccatissimo</em> runs occasionally cut into by multiphonic trills finally offers something akin to a sense of stable character and even of climactic function—it carries the perhaps somewhat unlikely indication <em>maestoso</em>—but even this can only yield to a strange, muted conclusion of barely audible dynamic fluctuations.

This valedictory music seems not only to close <em>Traces B</em> but also, in the context of the cycle,  to bid farewell to the idea of narrative cohesion as such. <em>Traces C</em> carries over the use of descending glissandi on longer notes from this passage, but little more. The same rhythmic arch runs into this third piece but its treatment is very different in effect, a change which came about partly in accordance with shifts in Erber’s musical language in the decade since the earlier parts of the cycle had been composed, and partly in a reflection of the difficulties of “continuing in the same vein” in a work-sequence which was already concerned with disintegration and which by now had to trace a path through the disintegration of disintegration itself. The lengthy grace-note groups and the generally constant high register that characterise Traces (at least until the entry of that ‘foreign voice’) and <em>Traces B</em> are considerably less in evidence here; the new focus on the flute’s lower register was a conscious decision on Erber’s part, and is achieved both by specific decisions made on the level of pitch structure and by a gradual focus on playing techniques (lip pizzicato, tongue ram, key percussion) which can only be produced in the lower part of the instrument’s range.

Like Traces and <em>Traces B</em>, the work reaches a critical moment near the end. But where <em>Traces</em> found an equilibrium of sorts, and <em>Traces B</em> withdrew at the very point where structural disintegration threatened, here it is the grid itself that we encounter, the work’s underlying material: exposed at last, but in such a way—at the slowest tempo used in the entire cycle, and with each component note decorated by just a small flurry of grace-notes—that the continuity of the line is threatened, not now by ambiguities of rhythmic and textural layering, but by the challenge the tempo and note-lengths pose to the player’s breath and lung capacity. “Through- out the cycle,” Erber has written, “the possibility of taking the music further has become less likely with each piece. Here, finally, there is a situation in which a continuation is inconceivable. The music has arrived at its dissolution, as must the original memory that brought the cycle into being.” The piece returns to the high register, where it concludes inconclusively, with five-second pauses separating four short, snapshot-like passages in which the layering techniques used throughout the cycle are applied at maximum density.

The two remaining works on the disc were both inspired by the musicianship of Matteo Cesari, who had premiered <em>Traces C</em> in the context of the first complete performance of <em>The ‘Traces’ Cycle</em> in May 2011. <strong>A Small Revelation </strong>is Erber’s 70th-birthday present for his former teacher—a tribute to Ferneyhough via Cesari, now a leading member of the youngest generation of Ferneyhough performers. It is in four short sections, each of which peels away a processual layer until in the last there is only one layer of “overwritings” in operation. The generating material, typically, stands just beyond our (and the music’s?) reach.

Also written for Cesari, the piccolo piece <strong>ein andrer Hauch </strong>takes its cue, and its title, from the third of Rilke’s Sonnets to Orpheus, a paean to the power of music figured in the idea of human breath. Two tempi alternate throughout the piece, the first presenting music which is dynamic and constantly mutating, created in typical Erberian fashion from multiple layerings of rhythmic and pitch material, the second subjected to a radical procedure in which all notes above a certain duration are written as harmonics—an extraordinary, unearthly sound, as if hollowed out of the instrument. In the work’s final stages the first type of music is hollowed out, too, the overlaying of different strata of material in the first tempo (which Erber associates with Rilke’s image of two arteries intersecting “where”, as the poet says, “is no temple to Apollo”) reaching a stage where rests in each layer cancel out the notes provided by the other layer, so that towards its end the work exists on a precipice of silence: grid and ruin, again and always.

1 The pitch and/or rhythmic content of several later pieces is again derived from Renaissance or early Baroque music— Trabaci in <em>àNeM</em> for piano (1996), Corelli in <em>Trattenimento da Camera</em> for two bass flutes (2000; the title is borrowed from Corelli’s Modenese contemporary Bononcini)—but in general the origin of the material is not of great significance except as a private tribute to favourite music. The sources are, perhaps, of greater importance to their new contexts in the abstracted blues of <em>You done torn your playhouse down</em> for piano (1996) and Am Grabe Memphis Minnies for solo guitar (1997). 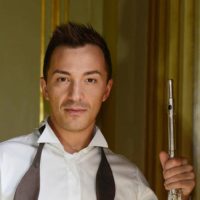 Artist, interpreter and researcher as in one, passionately keen on contemporary music, Matteo Cesari (Bologna, 1985) has played as a soloist worldwide, from Europe to China, from Australia to the United States. His musical career path has been enriched from Italy till Conservatoire de Paris and at Université Paris IV (Sorbonne), where he has obtained his doctor degree with the highest honour (congratulations from the jury) in April 2015, specialized in interpretation, research and practice, with his thesis on the interpretation of time in L’orologio di Bergson of Salvatore Sciarrino and Carceri d’Invenzione IIb of Brian Ferneyhough. Being the laureate at several other competitions, he also won the Kranichsteiner Musikpreis at Darmstadt.

He has collaborated with numerous soloists of his generation such as the singers Stéphane Degout and Barbara Hannigan, the harpists Anneleen Lenaerts and Émilie Gastaud. As a soloist he has played with BBC Scottish Orchestra and the Ensemble Intercontemporain. He has worked with some of the well-renowned composers, conductors and artists of his time such as Salvatore Sciarrino, Brian Ferneyhough, Pierre Boulez, Péter Eötvös, Matthias Pintscher, Tito Ceccherini, Ivan Fedele, Hugues Dufourt, Stefano Gervasoni, Bruno Mantovani, Michael Finnissy and Pierluigi Billone.

He has given quantities of masterclasses and seminars organized by the Conservatory of Shanghai (China), Tokyo University of the Arts (Japan), Monash University (Australia) and University of London (UK). On a very regular base, he works as a teaching assistant in the composition class of Salvatore at Accademia Chigiana of Siena in Italy.