This new arrangement for string quintet and organ was first performed on Remembrance Sunday in 2007 in the intimate setting of the choir stalls at St John’s Church, Wimbledon. By using a small number of singers, similar to the twenty or so in Fauré’s choir at the Madeleine, added to the chamber music quality of the strings, unique colours and textures are created which breathe new life into an otherwise familiar but continually evolving work.

Gabriel Fauré (1845-1926) began work on his Requiem purely ‘for the pleasure of it’, although it was quite probably composed in response to the recent death of his father. The subsequent passing of his mother shortly after its first performance gives the work an added poignancy, not least since the Requiem was an evolving work which he continued to revise from its inception in 1887 until the first published version of 1900.

In its sequence of movements the Requiem departs significantly from the standard liturgical text. Fauré does not underline the terrors of the Day of Judgement, and specifically includes the response In Paradisum from the Burial Service. Consequently, the prevailing mood is one of peacefulness and serenity.

Camille Saint-Saëns (1835-1921) played at various churches in Paris and from 1857 held the eminent position of organist at the Église de la Madeleine, where he was succeeded in 1877 by Gabriel Fauré. Although he is not generally associated with sacred music, Saint-Saëns’ sacred compositions are numerous and include settings of several psalms and liturgical texts, and this setting of the Ave verum corpus. The poem is a meditation on the Catholic belief in Christ’s Real Presence in the sacrament of the Eucharist.

Tantum ergo by Déodat de Séverac (1872-1921) is a serenely beautiful setting, and one of Séverac’s best known compositions. The words are taken from the final two verses of Pange Lingua Gloriosi by St Thomas Aquinas: ‘Therefore we, before him bending, this great Sacrament revere’.

Fauré’s Ave verum corpus is written in a style that recalls his Requiem – simple and emotional. The text, attributed to Pope Innocent VI, is a prayer for the Feast of Corpus Christi and in just five lines covers the Incarnation, the Passion, the Eucharist and the Last Judgement. The Cantique de Jean Racine is an early work, winning first prize from l’Ecole de Musique Classique et Religieuse of Paris where he was a student of Camille Saint-Saëns. Scored originally with harmonium and string quartet accompaniment, recorded here in a new arrangement for string quintet, one can hear rhythmic triplets contrasting with the steady declamation of Racine’s text.

Neil Ferris studied at Royal Holloway, University of London, and at the Royal College of Music. He is currently Music Director of Wimbledon Choral Society, one of London’s leading amateur choirs, and is Guest Conductor of Manchester Chamber Choir, Principal Guest Conductor of Birmingham Bach Choir.

In demand as chorus master to some of the leading symphonic choruses in the UK, Neil is Associate Chorus Director of the London Symphony Chorus, Chorus Director at the Royal College of Music and Chorus Master at the Endellion Summer Festival. He has also worked with the BBC Symphony Chorus, BBC National Chorus of Wales and the chorus of Cambridge University Music Society. In these roles he has prepared choirs for internationally acclaimed conductors including Valery Gergiev, Bernard Haitink, Carlo Rizzi, Marin Alsop, Donald Runnicles, Francois-Xavier Roth, Thierry Fischer, Jac van Steen, Martyn Brabbins and Ryan Wigglesworth. Read more

Formerly Head of Choral Conducting at the Royal Welsh College of Music and Drama, Neil helped establish the international reputation of the choral conducting course and developed the conservatoire’s choral ensembles. This summer he prepared the chamber choir to join the BBC Proms Youth Choir with the Vienna Philharmonic Orchestra under Sir Simon Rattle and conducted them on stage at the Wales Millennium Centre in a collaboration with international ballet dancer Carlos Acosta. In demand as a teacher and mentor to many young aspiring choral conductors in this country and abroad, he has led masterclasses in the USA, Ireland and Denmark and for the Association of British Choral Directors and National Youth Choir of Great Britain.

Recordings include an album of the choral music of Jonathan Dove with Convivium Singers released on the Naxos label and Fauré’s Requiem on the Convivium Records label. He has also prepared the chorus for the LSO Live recordings of Berlioz Roméo et Juliette, Brahms Requiem and Szymanowski Stabat Mater. 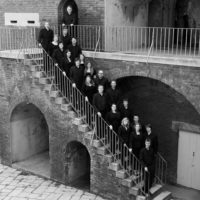