“The chamber music on this album is unified with a focus on string scorings and a connection between me and the late Arnold Rosner, a friend and colleague whose works it has been a privilege to be involved in curating. From the deeply dark intensity of Rosner’s 6th quartet to the luminous passion of my piano trio, I hope that the wide variety of emotional moods explored in this collection of pieces may provide for an enriching listening experience.” Carson Cooman 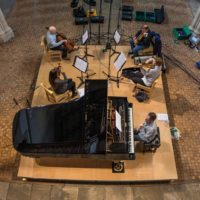 “Simply World Class” is the description made by the German press of the London Piano Trio. For the past 20 years the London Piano Trio have been touring, recording, and teaching across the globe to rave reviews. Upcoming tours include a 10 city tour of China in 2020 and a Far East Tour in 2021. At home they have been described as a “National Treasure”.

Their interest in promoting English music has resulted in them recording the complete trios of Donald Francis Tovey, Henry Cotter Nixon, and Cecil Armstrong Gibbs, with many premiere performances in places such as Dubai, Singapore, Manila, Naples, and Paris. They have actively commissioned works by composers such as Christopher Gunning, Jed Balsamo, Gavin Bryers, Clement Ishmael, Christopher Weeks and Carson Cooman.

There are no related posts at this time.