Featuring the chamber music by Rob Keeley, performed by Rowland Sutherland and the Fidelio Trio.

This CD offers a fascinating selection of Rob Keeley’s chamber works: polished, beautifully crafted music, which conveys a welcome sense of optimism. The performances are exemplary, as might be expected from flautist Rowland Sutherland and the members of the Fidelio Trio.

Trio for flute, cello and piano

Originally written in 2002, this four-movement work, like all the pieces on this disc, was substantially revised for this recording. It has a somewhat light, Gallic character, as perhaps befits the medium: the opening Allegretto is a sonata movement in fast triple time, including an exposition repeat (I have started to appreciate the psychological value to performers as well as to listeners, of literal repeats!) There follows a lyrical and expansive slow movement, a serenade-like waltz, and a fast, mercurial finale. Read more

Sonata for violin and piano

This was originally written in 1998 but has since undergone extensive and protracted re- writing. As one grows, one’s ears change, they hear and expect different things. I like to think that I have learned in the interim to make the notes ‘work harder.’ A broad, somewhat Brahmsian Allegro opens this Sonata: an unashamedly melodic Andante enfolds a more rhetorical central section, the Finale begins as an aqueous lullaby, turning into a scurrying, exuberant Allegro: the lullaby is recalled towards the end as a chorale in the piano, with pizzicato comments in the violin.

This work is a conflation of two separate works from the mid-90’s: ‘dead wood’ has been subsequently excised and contrasts have been integrated to create what I hope is a convincing single work: composers from the past wouldn’t have thought twice about such an undertaking. So, the opening Allegro moderato is an extensive revision of what I wrote in 1994, particularly in textural terms: it is also now more concise, although still expansive (I heard and wrote much of this work against the ‘background’ of the trios of Haydn and Schubert).

Secondly comes a movement originally entitled ‘Mind Games’, referring to the complex rhythmic layering and juxtaposition of the opening rhythmic motif. The Finale consists of a slow, intensely elegiac, heterophonic melody which eventually thaws into a more relaxed, diatonic Allegretto, the first time I have made use of large-scale tonal contrasts: the whole movement is dedicated to the memory of a much-admired composer, Nicholas Maw.

Flautist Rowland Sutherland enjoys an international career in many different fields of music. He regularly performs in new music and classical ensembles, jazz groups, symphony orchestras, various non-Western groups, pop outfits and as a soloist. Many of Rowland’s solo contemporary flute performances have been broadcast on BBC Radio 3, London. He has composed and arranged music for groups, ensembles and for the BBC.

Rowland was commissioned by the worldly, contemporary classical ensemble “Lontano” for his work Espiritu Libre, which received its first performance at La Linea, the London Festival of Latin Music 2005 at the South Bank Centre. They also performed Rowland’s new version for gospel choir and ensemble of his work The Mystical Land, during the ensembles 30th Anniversary concert series 2006.

Rowland’s piano trio One for Hermeto was given its world premiere by the Fidelio Trio for whom it was written for. The event took place during the BMIC’s The Cutting Edge 2005 series at The Warehouse, in London. 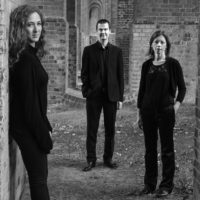 The …virtuosic Fidelio Trio… (Sunday Times) are Darragh Morgan, violin, Adi Tal, cello and Mary Dullea, piano.  Shortlisted for the 2016 Royal Philharmonic Society Music Awards, the Fidelio Trio are enthusiastic champions of the piano trio genre, performing the widest possible range of repertoire on concert stages across the world; they are broadcast regularly on BBC Radio 3, RTÉ Lyric FM, WNYC, NPR and featured on Sky Arts documentaries; they have an impressive list of commissions and first performances from the leading and newest composers and have a large discography of highly acclaimed recordings.

Since their debut at London’s Southbank Centre, they have appeared at the Wigmore Hall and Kings Place, at festivals from Brighton and Cheltenham to St. Magnus, and from Gregynog to Huddersfield. They regularly perform across the Irish Sea at the National Concert Hall, Dublin, Kilkenny Festival and Belfast Festival at Queens as well as overseas in Shanghai, Porto, Paris, Venice, Florence, Johannesburg, New York City, Princeton, San Francisco and Boston.

Keen to ensure the future development of the piano trio, The Fidelio Trio work closely with composition and performance students at institutions across the UK and all over the world including the Peabody Conservatory, Curtis Institute, NYU, NAFA Singapore, and Stellenbosch Conservatorium South Africa. They have been artists-in-residence at St. Patrick’s College Dublin City University, University of Illinois at Champaign-Urbana, and the State University of New York, SUNY.

2017 saw tours of USA, South Africa, Zimbabwe and China, many festival appearances including a Schubert cycle at Kilkenny Arts Festival. Collaborations included new piano trio commissions from Kevin Volans and Alexander Goehr and a world premiere recording of two works by Philip Glass for his label Orange Mountain. This year they continue their residency at the National Concert Hall in Dublin; a further tour of China and recordings of Gerald Barry’s Chamber Music for Mode Records and a second instalment of French Piano Trios (Chausson, Fauré and Satie) for Resonus Classics.

They are Artistic Directors of their annual Winter Chamber Music Festival at Belvedere House, Dublin City University and continue to be passionate in their advocacy for the piano trio across the world.