The aim of this collection of liturgical music is to highlight how singers of all ages contribute to the musical life of Portsmouth Cathedral. Each choir and piece of repertoire has its own characteristics and so musical items have been recorded in different parts of the cathedral building.

The pieces on this disc reflect a journey through the Christian year. Advent is a time of expectancy and of penitence, waiting to welcome God’s incarnate love.

The ‘Kyrie Eleison‘ is an ancient Greek text sung at the opening of every celebration of the eucharist. The setting here is taken from Vaughan Williams’ Mass of 1922, drawing upon the modal harmonies of English polyphony. It is written for a quartet of solo voices and double choir. ‘Hodie Christus Natus Est‘ is the antiphon for the first mass of Christmas Day: it will perhaps be familiar as the processional from Benjamin Britten’s ‘Ceremony of Carols’. At Christmas it is a tradition at Portsmouth, for obvious reasons, to begin the Christmas Morning eucharist with the joyful unaccompanied carol ‘I Saw Three Ships’. The ‘Gloria‘ announces the song of the angels at the birth of the Messiah. This example, drawn from the late mediaeval plainsong Mass VIII, sometimes known as the ‘Missa de Angelis‘, would originally have been sung by a cantor and choir of monks. Whilst ‘The Call‘, ‘Creator of the Stars of Night‘ and ‘Faithful Magi‘ all are appropriate to the season of the Epiphany, the ‘Coventry Carol‘ for three voices reflects in its spare mediaeval harmonies Herod’s massacre of the Holy Innocents. The ‘Carol for Emmaus‘ takes us through Epiphany to the ‘Nunc Dimittis‘ and Candlemas, when the aged Simeon, realising that he has at last seen the Redeemer whom he has awaited so long, can now at last depart in peace. This setting by Herbert Howells was commissioned in the 1940s by King’s College, Cambridge. Read more

Nicholas Farrant has left us few extant compositions but ‘Call to Remembrance‘ is a penitential piece, suitable for the season of Lent, and asks the Christian conscience to examine itself for the test of Holy Week and Easter to come. ‘If Ye Love Me‘ and ‘Ubi Caritas‘ are sung at the eucharist of Maundy Thursday, recalling Christ’s injunction to the disciples to adhere to God’s teachings of universal peace and charity to all. The centrality of the eucharist is commemorated in Byrd’s miniature masterpiece ‘Ave Verum Corpus‘ which reflects the sacrifice of Christ in the shedding of his blood. Victoria’s ‘O Vos Omnes‘ and ‘Consider All, Ye Passers By‘ by Amner both capture the desolation on Good Friday of the deserted and crucified Jesus before Vaughan Williams’ ‘Easter‘ shatters the darkness with its triumphant choruses declaiming George Herbert’s poem of faith in the Resurrection. This mood of joy continues in the Great Choir’s rendition of one of the most famous of all hymn tunes, ‘All People That On Earth Do Dwell‘, preceding the final responses by Naylor, which are customarily sung at the end of each service of evening prayer at Portsmouth, giving God thanks for bringing His people safely through each day and each season of the year. 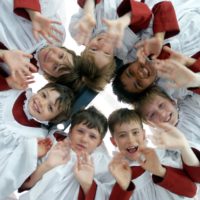 The Cathedral Choir is made up of twenty-four boy choristers and fourteen gentlemen (made up of seven lay-clerks and up to seven choral scholars) who contribute to the pattern of daily cathedral worship. The choristers rehearse on weekday mornings at 8.00am before a normal school day in preparation for the week’s music. In any normal week the Cathedral Choir sings for at least 5 services.

The choristers are educated at Portsmouth Grammar School that, as such acts as our choir school. Opportunities exist for counter-tenor, tenor or basses who, having completed their school or university education, are looking for the chance to sing and work within a cathedral foundation for a year with a Choral Scholarship. Read more

The choir plays an important role in the life of the Diocese and City by singing at Ordination, Confirmation, Civic and Remembrance services. The choir is often invited to sing at churches throughout the Diocese of Portsmouth. The Royal Marines’ School of Music is now based in Portsmouth, and the choir and Orchestra or Band of the Royal Marines regularly work together.

The choir has been at the heart of recent DDay Commemorations in Caen and Bayeux in Normandy, France and here in the UK. The ceremonies saw BBC Radio broadcasts, a concert in Caen with the London Mozart Players and appearing at the International Service of Remembrance at Bayeux in the presence of HM The Queen, President of France and The Prime Minster and an International Drumhead Service on Southsea Common in the presence of The Princess Royal.

The 200th anniversary of the Battle of Trafalgar and death of Lord Nelson involved the choir performing at a number of international and national events. Notable amongst those was the International Drumhead Ceremony during in the International Festival of the Sea in June, and at events aboard Nelson’s flagship, HMS Victory, during Trafalgar Week (including three BBC radio and TV broadcasts). Our ‘Nelson year’ concluded with a live broadcast of Choral Evensong on BBC Radio 3 on the day 200 years ago that Nelson’s body sailed from Portsmouth to London for his State Funeral. 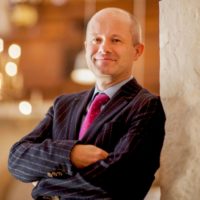