In this newly-commissioned work in 12 movements, Tarney has interpolated the conventional text from the Gospel of Luke with apocryphal and old Testament texts as well as extracts from the Book of Maryam from the Qur’an. The fuller picture this paints completely changes the way we think of this important bible story and Tarney sets the whole with memorably exquisite musical colours which bow to no one. In a world riven with division and violence based on religious lines, this piece reminds us of what we could have in common if we looked a little harder.

Mary was about 16. As many traditional images show, she may have been working at her spinning wheel, minding her own business, when the Angel Gabriel appeared to her and told her the news that she was with child. Not only that, but her son was God, and would grow up to be the saviour of mankind. I can’t help but feel that ecstatic jubilation was probably not her first response. Many settings of the Magnificat present the text as though Mary is saying it there and then, as an outpouring of joy and wonder, which it doubtless is, with jubilant brass and clattering timpani. I, however, have opted for a different direction to this story: one in which we hear the words of the Magnificat as a considered, personal reflection, rather than a spontaneous outpouring, as Mary replays that moment in her mind, but now in the light of the events that followed—many of them full of uncertainty, and pain. Read more

To tell the nativity story, I have drawn from various sources, including lines from the book of Mary (Maryam) in the Qur’an. This book describes in some detail the conception and birth of Jesus (or ‘Īsā), who is considered one of the most major prophets in Islam. Though much of the account seems rather familiar, it does, however, contain some surprises. For instance the line, ‘and the pains of childbirth drove her to the trunk of a palm tree, and she said, “I wish I had died before this and was in oblivion, forgotten”’(Qur’an 19:23). This seems to display a very human response to the situation. Perhaps the fact that she wishes to be in ‘oblivion, forgotten’ is a reaction to the pain of childbirth, or maybe an indication that she already has a sense that celebrity (and all it entails) awaits her. As Luke the Evangelist has it: ‘Yea, a sword shall pierce through thy own soul also, that the thoughts of many hearts may be revealed.’

Apart from the very familiar lines from St Luke’s gospel, the main source of the narrative is the Infancy Gospel (or Protevangelium) of James— a non-canonical gospel of around the mid-second century. This gospel offers a plethora of fascinating (if anecdotal) details, and alludes to many of the Old Testament’s headline barren-but-now-miraculously-with-child characters: Sarah (and Abraham), and Hannah (and Elkanah). God granted Hannah a son to Elkanah after many years barren. Hannah thanks God with her own Magnificat, a song of Joy, which she offers in gratefulness and praise for her son, which biblical scholars understand to be the model for Mary’s Magnificat. Luke has Mary’s words resonate with Hannah’s as if they were ringing in her ears as she said them, drawing a parallel with her present situation.

When it comes to Mary and Joseph, the Protevangelium paints a pretty grim picture of life, full of worry, fear, anger, and persecution. It is difficult to see how this wouldn’t impact on Mary’s memory of her Magnificat, her song of praise to God, who at times must have seemed very much at arm’s length.

One small but poignant detail from this gospel is that the fabric she was spinning as the angel Gabriel appeared to her became part of the veil of the temple in Jerusalem, which would later be torn from the top to the bottom at the moment of her own son’s death on the cross.

The icon of the Virgin Mary (Santa Maria di Sisto / del Rossario) used within this booklet has become very important to me and to this piece. It is a rare image of Mary without Jesus from the sixth century, which now resides in Rome. The Virgin’s sorrowful, plaintive expression seems to say something of how difficult a young, unsuspecting, ordinary girl found the acceptance of God’s will into her life in these circumstances. Tradition holds that it is the first in a series of icons written by Luke the Evangelist, from whose gospel the account of Mary’s Magnificat comes.

Whether this or other details are historically accurate or not seems in some ways immaterial as they contribute richly to our understanding of the truth of human experience: a story that is a testament to an incredible trust in God by keeping ones faith in the face of great hardship, which has inspired men and women to follow her example.

I have used texts from the three Abrahamic religions, (Christianity, Islam, and Judaism) fully aware of the historical and present tensions that exist between them. And yet one thing is common to all: we live in difficult times to be a person of faith, sharing similar challenges, and requiring a similar fortitude. Perhaps we can understand the Magnificat not only as a proclamation of ecstatic joy, but also as a symbol of faith in the face of uncertainty and of strength in the face of adversity.

Serafine Chamber Choir is made up of some of the most talented young conductors in the country, all of whom have been taught by director, Manvinder Rattan. Serafine is made up of professional singers, teachers and students, all of whom share a passion for high quality music making as well as their own love of conducting.

The Sinfonia is made up of both seasoned and young professional players, along with students from the London conservatoires.

Serafine enjoyed an illustrious debut performance in July 2012 at the Grosvenor Chapel, London, performing a programme of Bach and Handel in the company of Lucy Crowe, Tim Mead, Robert Murray and Matthew Rose and players from the OAE and the Academy of Ancient Music, raising over £2000 for the charity Songbound. 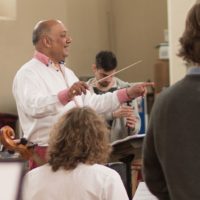 Manvinder Rattan was born in Nairobi, Kenya and moved to the United Kingdom with his family when he was two. He has lived most of his life in Woodford Green in Essex where he went to Churchfields Junior School and then Ilford County High School for Boys.

Manvinder’s family was not particularly musical but excellent music teachers cannot fail to inspire.  In this case, Francis Roads and Ian Gorman.
Manvinder started playing the cornet at the age of seven, moving on to French Horn when he was 11. He still enjoys playing the recorder and can’t remember a time when he wasn’t singing. Read more

Manvinder read French and History at The College of Ripon & York St John where he was a Choral Scholar. As part of the scholarship, the College paid for Manvinder to attend his first conducting course with Sing for Pleasure; his life has not been the same since. Under the inspirational leadership of James Wild, the course was to have a profound impact on Manvinder’s life. Sing for Pleasure delivers very high quality teaching giving participants a strong foundation of key conducting skills on which they build according to their own abilities.

But music wasn’t his intended career and Manvinder joined John Lewis as a graduate trainee in 1989 in Sheffield. There. he sang with the Cathedral choir before moving to Portsmouth where he also sang with the Cathedral Choir. A move to John Lewis Watford brought his first contact with the John Lewis Partnership Music Society, first as as performer and then, from 1995, as its Musical Director, initially in addition to his role as a selling manager, and from 2006, as his primary role in the company.

In 1994, its single choir gave two performances a year; now with over eight choirs around the country, activity has grown hugely. Manvinder established The Cavendish Singers, an award-winning chamber choir, and The Cavendish Ensemble, voted one of London’s top five amateur orchestras in 2009 by Classical Music magazine. Find out more about the John Lewis Partnership Music Society here.

Manvinder Rattan enjoys delivering singing workshops around the country; seeing people sing when they always believed they couldn’t is something he finds very fulfilling. He has been known to have a roomful of self-perceived non-singers singing in four part harmony within 30 minutes.