In recent years the choral music of America has become increasingly popular. ‘The Road Home’ presents a small survey of some of the lesser-known gems of the repertoire.

Gerre Hancock is most famous as Organist and Master of the choristers at Saint Thomas Church, New York. Hancock’s beautiful and harmonically rich arrangement of ‘Deep River’ has the true feel of an ebbing and flowing river. The spiritual itself offers advice to slaves who wish to escape from their masters by the river, which will wash away their scent.

Carter Sligh, based in Washington DC, sang with Willow Consort from 2014-15 whilst studying at The University of York. ‘Soar Away’ takes its inspiration from a style of singing known as ‘Sacred Harp’. The name derives from a tune book printed in shape notes. There are four shapes, each with a connected syllable, fa, sol, la and mi. These allowed non-music readers to learn the harmonies for full congregational singing. The idea behind ‘Soar Away’ is a group of singers in a church up in the mountains. Everything other than the theme directly lifted from the hymnbook is echoes, bouncing off the mountains.

‘I Am’, a setting of the poem ‘Do not stand at my grave and weep’, begins placidly. It takes the refrain of “I Am” as a mantra for existence. Dominick DiOrio’s use of a dramatic soprano solo is both a musical and theatrical choice. The soloist communicating from beyond death to those still alive. The act of “being” is here an act of defiance, with life triumphing over the grave.

‘Were You There’ is a tender and beautiful hymn that dwells on the crucifixion. In this luscious arrangement by Norman Luboff, the simple homophonic setting really allows the listener to focus on the words.

Frank Ticheli wrote ‘There Will Be Rest’ for friends whose child had died. It sets a hauntingly beautiful poem by Sara Teasdale, one of America’s greatest female poets. Teasdale took her own life at the age of just forty-eight. Ticheli writes in the front of the score ‘Many of her poems address the pain that tormented her spirit. But to the end she seemed to draw strength and hope from the stars and their permanent radiance’. ‘There Will Be Rest’, was one of her last poems. It is a perfect summary of her lifelong concern for the stars and their ancient promise of peace. By design, this choral setting captures the poem’s purity of spirit and delicate lyricism.

We have chosen to end the recording with Bern Herbolsheimer’s devastating setting of ‘Seven Last Words’. Willow Consort gave the UK premiere of the piece in 2016, shortly after Bern’s death. The piece uses only the words of Christ without their specific context from a composite of the four Gospel records. Herbolsheimer uses a combination of Latin and English. This allows him to concentrate specifically on the words and to repeat them with great freedom. The music is exquisitely crafted and the parts are very carefully layered. They rise with increasing intensity and then fade back into silence. We are able to hear the full range of emotion in the human voice.

We are delighted to have recorded Bern’s music, and would like to dedicate our CD to his memory. Borrowing words from the final movement of ‘Seven Last Words’ we offer this tribute to Bern: “Father, into thy hands I commend my spirit.”

Willow Consort formed in 2014 and have received praise for its imaginative programming and expressive performances. They share neglected repertoire to a wide audience in the UK and further afield.

Membership includes some of the best young singers in the UK. In addition, they regularly invite guest singers from around the world to join its ranks. Recent collaborations have included singers from Australia, America, France and Norway.

Future plans include a return to programmes of Russian sacred music. There will also be a new programme of lesser-known English Renaissance masterpieces for low voices. 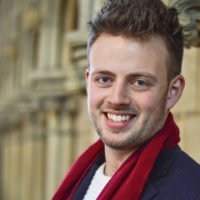 Danny Purtell is an English conductor, singer and composer based in Denmark.

He graduated from the University of York in 2015 with a first-class BA in Music. During his study, he was the inaugural recipient of the Stile Antico Foundation Bursary.

He works regularly with some of the best ensembles in Europe. For example: I Fagiolini, Ars Nova, Mogens Dahl Kammerkora and the Christians IV Vokalensmble.