Christmas is a particularly busy time of year for the Chamber Choir of Whitgift School, and this recording represents a selection of the music sung by the boys and men of the Choir, at the annual Whitgift Carol Service, at Croydon Minster. The repertoire featured is wide-ranging; from the early sixteenth-century carol Personent Hodie, through to O Radiant Dawn by contemporary Scottish composer, James MacMillan. The five carol arrangements for choir, brass, percussion and organ were written by Robert Ampt, the City Organist of Sydney Town Hall, and add to the festive flavour of this carol CD. 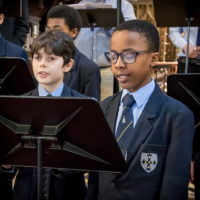 The Choir of Whitgift School is based at Croydon Minster, which is deeply rooted in the Anglican choral tradition. It boasts over 70 singers in its four choirs: the Choir of Boys & Men, the Girls’ Choir, the Choral Scholars and Lay Clerks. There are five choral services each week during term time, as well as regular concerts throughout the year. All choirs have toured, broadcast and recorded.

Over the years, the Minster has developed strong links with Whitgift School and the School has now become a major part of the Minster’s rich choral programme. More than half of the Minster boy choristers attend Whitgift School where they receive a Minster Choristership carrying a remission of day fees of 10%. Whitgift also provides postgraduate Organ and Choral Scholars, as well as professional Lay Clerks to sing regularly with the Minster Boys’ Choir, enabling the Minster to run a busy schedule of cathedral-style choral services. 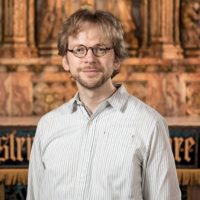