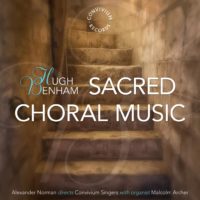 Hugh Benham is a British composer, Director of Music at St. Boniface Church of England in Chandler’s Ford, Hampshire. I could not find information about his age, but in an autobiographical note online Benham mentions attending the University of Southampton in the 1960s; he published a study of Latin church music in England in 1977, which would indicate a certain seniority.

The music on this disc is lovely and beautifully performed. A note in the booklet states, “Some of the choral music on this disc is suitable for small … four-part choirs in parish churches, accompanied by organ, while other pieces, including the Mass, Evening Service, O sacrum convivium II and Love’s redeeming work¸ were composed with larger spaces in mind. Everything is primarily for listening, including what might be termed ‘devotional listening.’”

Devotional aptly describes the mood of this disc, whether or not the listener is particularly religious. Most of the music is written in slow tempos and feels spiritually tranquil. What allows it to maintain interest is the composer’s level of melodic inspiration and the superb quality of the singing by the Convivium Singers. Conductor Alexander Norman manages to inspire emotional engagement and commitment from the group, which in turn engages the listener. The alternation between a cappella works and works for chorus and organ provides some variety, and a handful of organ solos offers further variety—these are well played by Malcolm Archer.

Another aspect that maintains one’s interest is Benham’s imaginative use of harmonic motion. The anonymous annotator points out, for instance in Divinum Mysterium the unexpected final C♯-Major chord in a piece the principal keys of which have been G Major and E Major. Throughout, there are moments of intriguing harmonic surprise or truly imaginative melodic turn. As a result, music that could have seemed soporific because of its largely prayerful nature turns out to be more dramatic and intense than one might have expected.

The reverberant recorded sound is appropriate, and it never turns muddy. The inclusion of full texts and helpful notes completes a fine package. There may not be any timeless masterpiece on this disc, but there is a good supply of attractive and lovingly performed music.