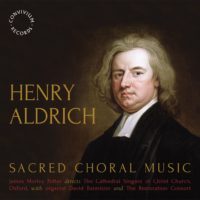 Henry Aldrich is not exactly a familiar name, but he was a major figure in the 17th and early 18th centuries in Oxford, as Dean of Christchurch, architect, mathematician, controversialist, and composer. He compiled music for University ceremonies, and one example, of an instrumental suite and a Latin Ode for the ‘Oxford Act’ of 1682, is included on this disc. It is the only piece which includes instrumentals as well as the organ, and its ceremonial nature is indicated by its Latin text. Aldrich’s ‘recompositions’ of Latin motets by composers such as Tallis and Palestrina, which make up the greater part of his surviving church music, were provided with newly-written English texts. One example is included, which imaginatively combines Byrd’s polyphony with Aldrich’s own characteristic style.

The bulk of the disc is made up of all his seven surviving full anthems and five of the 16 verse anthems, together with a Magnificat and Nunc Dimittis. Aldrich is described in Grove as a ‘highly competent composer’, which does not quite hide the fact that sometimes the music is rather routine. Yet there are not infrequent moments of attractive word-setting, which suggest why his works remained in the 18th-century repertoire of the Chapel Royal, and that they deserve revival. The verse anthems generally give the work to a solo voice, with the chorus confined to the Gloria. The style here is more elaborate, with decorative passage-work and word-painting.

It is appropriate that this recording should be made by a voluntary mixed-voice choir of Aldrich’s college. They offer forthright and committed performances of the music, and their soloists generally cope well with the sometimes vocally demanding anthems. More about Aldrich can be found here, a site which also includes downloadable scores of the full anthems.

Organists’ Review is the leading magazine for all lovers of the organ and its music. It provides a kaleidoscope of the organ world, with articles, information and stunning pictures covering a wide range of organ related topics. In addition to regular features such as new music and CD reviews, each issue explores in depth a theme of current interest.